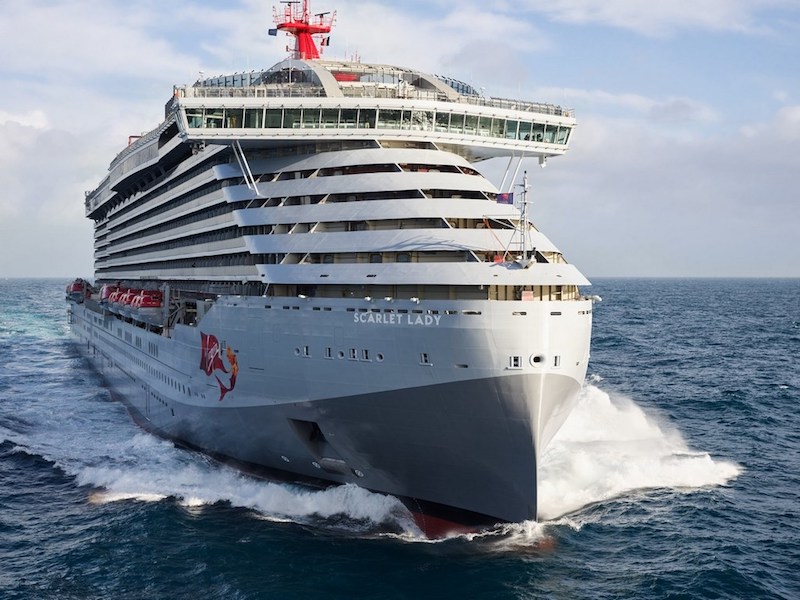 The ship, which successfully completed its first round of sea trials in Europe late last year, is the first of four ordered by the new cruise line from Sir Richard Branson's Virgin Group.

Virgin Voyages President and CEO Tom McAlpin, the Governor of the Liguria Region Giovanni Toti, the Mayor of Genoa Marco Bucci, the Chairman of Fincantieri Giampiero Massolo and its CEO Giuseppe Bono were among the notable people in attendance for Thursday's ceremony.

Scarlet Lady is scheduled to set sail on her inaugural maiden voyage on April 1 following a pair of Sneak-a-Peek preview sailings late next month.

The ship weighs approximately 110,000 gross tons and spans 912 feet in length and 125 feet in width. Like each of Virgin Voyages' four ships, Scarlet Lady will be equipped with 1,400 guest cabins that can accommodate more than 2,770 passengers.

Guests sailing the cutting-edge ship will benefit from smart wearable technology, allowing them to do things like access their cabin and make onboard purchases, as well as minimal levels of noise and vibration. Guests will even be able to control a wide range of cabin functions from an app on their smartphone, including adjusting the air conditioning, lighting, blinds, music and television.

Scarlet Lady will also operate with a reduced overall environmental impact thanks to a number of unique features, including a scrubber system for the waste management of sulfur dioxides; a catalytic converter to reduce nitrogen oxides; LED lights to reduce energy consumption and hydrodynamic hull design that allows for fuel saving

In June last year, Virgin Voyages unveiled that Scarlet Lady would be led by Captain Wendy Williams. Williams is the first Canadian woman to captain a ship for a major cruise brand. Apart from the captain, Virgin Voyages also recruited a number of female officers for its new ship.

Virgin Voyages' second ship, Valiant Lady is already under construction in the same shipyard and is scheduled for delivery next year.

Meanwhile, the cruise line's third and the fourth vessels, which still have yet to named, will set sail in 2022 and 2023, respectively.