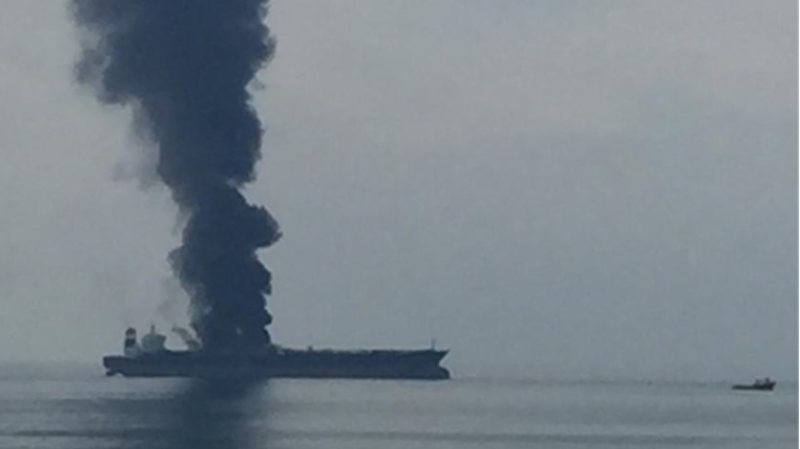 According to information from different sources, there were 16 people on board, all safely evacuated. Maintenance works mentioned as cause of fire, so assumedly, there were some hot works on cargo deck, or in cargo tank, which sparked off fire and highly likely, explosion. Tanker is in a lay-up for at least two years. Ships in lay-up are prone to all kinds of accidents, including fire, leaks, developing list, etc.

At least it is clear now, that Persian Gulf tensions have nothing to do with fire, same can be said about Climate Change, gender equality, and rise of populism. Even President Trump can’t be tied to this fire, though good Dem fellas insist nothing bad happens without his involvement.

Tanker was reported on fire off Sharjah, UAE, in the afternoon Jan 29. Reports went with video footage and photos, but all being taken too far from the ship. It’s obviously a tanker, a big tanker with that, anchored and in ballast. Later unconfirmed information identified tanker in question as VLCC ZOYA 1, operated by UAE company. Tanker in ballast is anchored off Sharjah since at least year 2018, due to financial and legal disputes, including unpaid crew wages. It is highly likely, that the ship has on board some watchmen at best, not regular crew. Or maybe tanker is unmanned. Obviously, gas in empty tank or tanks somehow inflamed, maybe igniting residues in tanks bottom part.