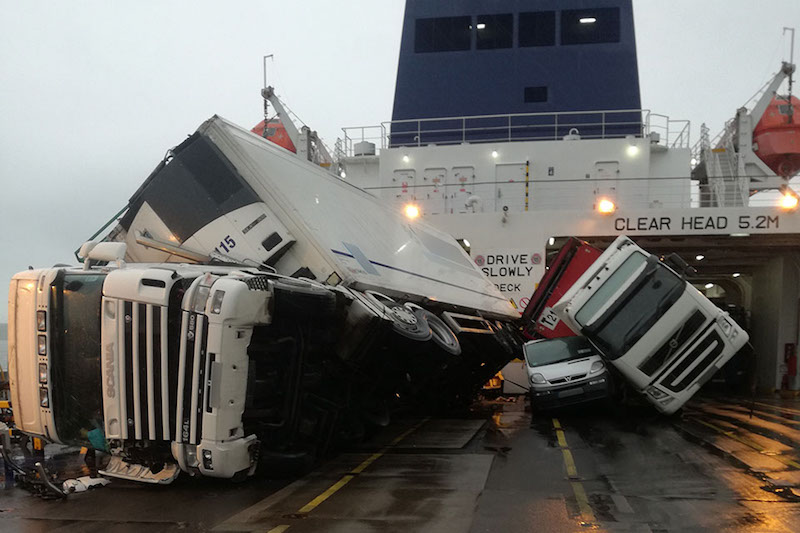 At 0633 on Tuesday 18 December 2018, the roll-on/roll-off (ro-ro) passenger ferry European Causeway rolled heavily in very rough seas and very high winds during its voyage from Larne, Northern Ireland to Cairnryan, Scotland. The violent motion caused several freight vehicles to shift and nine to topple over. This resulted in damage to 22 vehicles, some damaged severely.

At least six freight vehicle drivers had remained in their cabs on the vehicle decks during the crossing and four were found in cabs of vehicles that had toppled over. One driver was trapped and had to be freed by the emergency services when the ship arrived in Cairnryan.

Safety Issues
• the route being followed had not been adjusted sufficiently to mitigate the effects of the sea conditions and reduce the likelihood of severe rolling
• the cargo lashings applied were insufficient for the forecasted weather conditions and the ship’s approved cargo securing manual provided limited guidance to ship’s staff
• drivers remaining in their vehicles during the ferry’s passage, in contravention of international regulations and company policy, was not uncommon and is an industry-wide issue

Recommendation
A recommendation (2020/107) has been made to P&O Ferries Ltd to amend their SMS to provide specific guidance on the lashing of cargo in heavy weather.

The full report is available at: