On 17 August 2019, Stolt Groenland, a Cayman Islands registered chemical/ products tanker operated by Stolt Tankers B.V. sailed from Houston, USA for passage to Kobe, Japan via the Panama Canal. The tanker was carrying 20 different chemical cargoes in 37 of its 39 cargo tanks. After discharging four cargo tanks off Kobe on 23 September and six cargo tanks at the Odfjell Terminal in Ulsan, Republic of Korea, between 26 and 27 September, Stolt Groenland moored alongside the Yeompo Quay in Ulsan. Two further cargo tanks were then discharged via a ship to ship transfer with Stolt Voyager. On completion, Stolt Voyager moored ahead of Stolt Groenland.

At about 0600 on 28 September, the Singapore registered chemical/ products tanker Bow Dalian secured alongside Stolt Groenland’s port side. The purging of Bow Dalian’s cargo tanks with nitrogen supplied from shore- side vehicles was then commenced in readiness for a ship-to-ship cargo transfer with Stolt Groenland.

At 1043, vapour started to release from the pressure vacuum valve for Stolt Groenland’s number 9 starboard (9S) cargo tank, which contained styrene monomer. About 2 minutes later, a high- level alarm indicated that the level in 9S cargo tank had reached 95%, soon followed by a high-high-level alarm indicating that the level had increased to 98%. By now, Stolt Groenland’s on-watch deck officer and chief officer had made their way to the cargo control room and they saw from the cargo monitoring system that the pressure inside 9S cargo tank was rapidly rising. Suddenly, at 1050, two explosions were seen and heard in rapid succession in way of the tanker’s cargo manifold. The resulting fireball passed very close to a road bridge above the quay.
Stolt Groenland’s and Bow Dalian’s crews immediately operated and directed foam monitors towards the respective cargo manifolds. Bow Dalian’s cargo manifold drench system was also activated. The fire on board Stolt Groenland was very intense and large plumes of thick black smoke were emitted. Stolt Groenland’s crew evacuated using the free-fall lifeboat at the stern while Bow Dalian’s crew were taken off by Korean Coastguard boats that had arrived at the scene.

The fire was fought from the shore and from the water and lasted until early the following morning. The damage in way of Stolt Groenland’s cargo manifold and accommodation block was extensive. The following persons were injured: Stolt Groenland’s gangway watchkeeper, who was blown over the guardrails by the force of the explosion; a deck rating on board Bow Dalian; and, a number of shore workers, including firefighters and police during the emergency response.

On 28 September, the Maritime Authority of the Cayman Islands requested the MAIB investigate this accident in accordance with the International Maritime Organization Casualty Investigation Code2. During the on-site investigation in Ulsan, the MAIB was assisted by the Korean Maritime Safety Tribunal. In addition, the Singapore Transport Safety Investigation Bureau supported MAIB’s evidence collection on board Bow Dalian, along with the vessel’s owners. 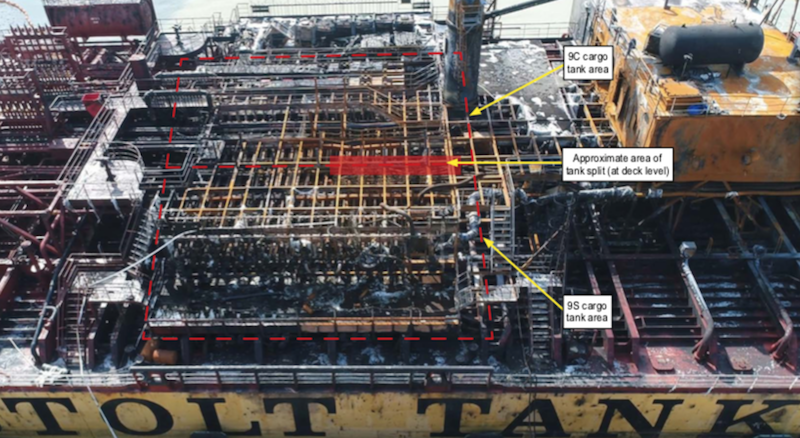 The explosions on board Stolt Groenland were probably caused by the rupture of the deck above 9S cargo tank, followed immediately by the ignition of the styrene monomer vapour that was then released. The rupture was due to over-pressurisation and the likely sources of the ignition were static electricity, sparks or elevated steel deck plate temperatures resulting from the tank rupture. A large hole was found in way of the tank’s common bulkhead with number 9 centre (9C) cargo tank and its hatch cover had been blown off. No cargo operations or deck maintenance were in progress at the time. VDR data showed that the temperature of the styrene monomer had reached 100oC at the time of the explosion. Such an elevated temperature indicates that the cargo was polymerizing.

The MAIB’s investigation will focus on, among other things:
●  the factors contributing to the initiation of the polymerization of the styrene monomer,
●  cargo monitoring, and
●  the emergency response.  The MAIB will continue to work closely with all the stakeholders involved in order to progress the investigation as swiftly as possible and ensure appropriate action can be taken in order to further reduce the likelihood of similar accidents in the future. Once the MAIB’s investigation is complete, a report will be drafted and distributed to key stakeholders for a 30-day consultation period prior to it being published.  In the interim, chemical tanker owners/operators are reminded to:
●  Adhere to the carriage and storage instructions details on the safety data sheet, the  certificate of inhibitor, and those provided by the charterer.
●  Witness the addition of inhibitor into each cargo tank.
●  Closely monitor cargo temperature for unexplained increases.  They should also ensure that their crews are familiar with the action to take in the event of the styrene monomer self-heating/polymerizing.