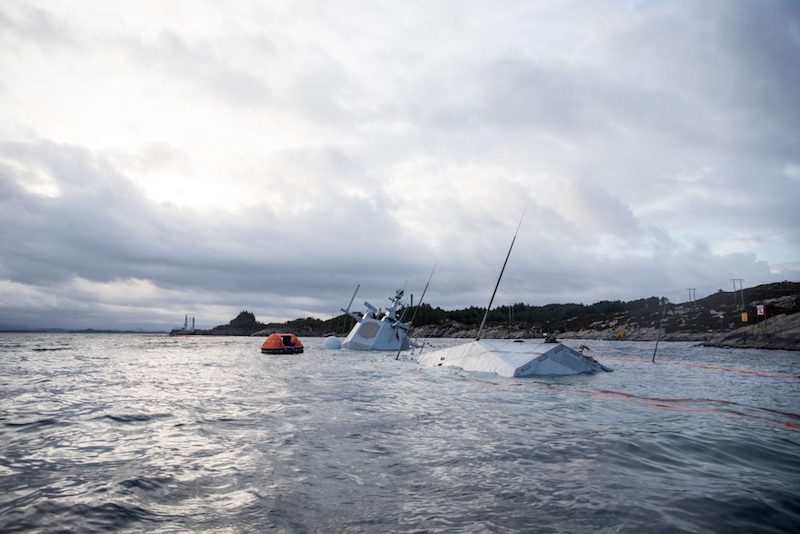 Norwegian frigate KNM Helge Ingstad seem to have been unaware of the inbound Sola TS tanker before it was too late, preliminary marine accident report from Norway’s Accident Investigation Board (AIS) indicates.

The two ships collided on November 8, outside of the Sture terminal in Øygarden Municipality in Hordaland County, Norway. The frigate sustained significant damage and sank several days later.

According to the report, when the terminal first became visible from KNM Helge Ingstad, Sola TS was alongside at the terminal and the deck of the tanker was well-lit.

Furthermore, the report findings show that at a distance it would be difficult to separate the lights on the tanker from the lights at the terminal. Also, the lights did not move as the tanker was still alongside quay.

“It is highly probable that both these factors gave the crew on KNM Helge Ingstad the impression early on that the lights belonged to a stationary object,” the report added.
“The tanker’s use of deck lights after departure also meant that the crew on Helge Ingstad were unable to spot the navigation lights on Sola TS. When KNM Helge Ingstad at approximately 04:00 stated that they could not turn to starboard, it was based on a continued perception of the lights as being stationary and that a turn to starboard would send them straight into the lit object.
“They also believed that they were communicating with one of the three northbound vessels that they were monitoring on the radar. It was not until just after this that the crew on KNM Helge Ingstad became aware that they were on collision course, at which time it was impossible to avoid a collision.”

The Collision
Before the incident took place the frigate was on a southerly course in inshore waters north of Bergen conducting navigational training.
Vessel Traffic Service Centre on the island of Fedje (Fedje VTS) was notified that during its southbound voyage the navy ship was sailing at a speed of 17-18 knots. The AIS on board the frigate was set only on the receiver mode.

At this time, Maltese-flagged tanker Sola TS was getting ready to depart from the terminal loaded with crude oil. The ship was boarded by a pilot and was assisted out of the terminal by two tugs.

Around that time, there were three other northbound vessels in the area south of the Sture terminal, the report said.

When Sola TS left the quay, its navigation lights and deck lights were lit.

At approximately 03:57 the pilot observed the echo of a southbound vessel on the radar, which would cross his course line, but did not have an AIS signal for the vessel. The pilot called Fedje VTS and asked for the name of the vessel that was heading towards the tanker on the port bow. The VTS answered that they had no information about this vessel.

Once Fedje VTS  informed Sola TS that the vessel was possibly KNM Helge Ingstad, the pilot called the frigate and requested it to turn to starboard immediately.

The frigate’s bridge crew replied that they could not turn to starboard before they had passed the object they saw on their starboard side.

Just after 04:00, the frigate was approximately 400 m from Sola TS. As the naval vessel did not change course, both the pilot and Fedje VTS called it requesting the vessel to act. Shortly thereafter, KNM Helge Ingstad carried out an avoidance manoeuvre, but it was too late, and the two vessels collided.

The frigate lost control of the rudder and propulsion, drifting uncontrollably towards the shore, where it grounded. As the vessel started taking on water, its crew was evacuated.

The AIBN plans to continue its investigations focusing on human factors, collaboration on the bridge, training and procedures, traffic control, language and communication, technology, and technical, operational, organisational and strategic choices.