The Re-Emergence of Wind Power 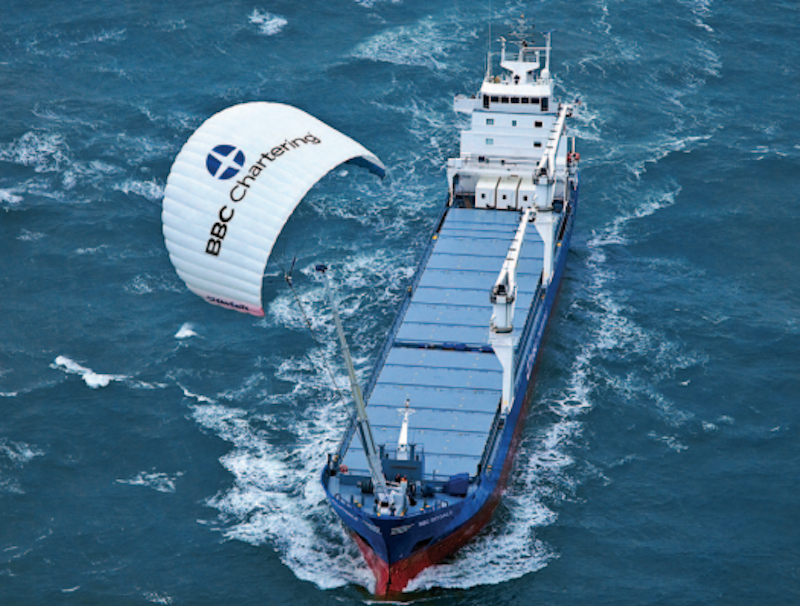 A recently published report entitled “Study on the Analysis of Market Potentials & Market Barriers for Wind Propulsion Technologies for Ships” highlights the future potential for wind power in the shipping industry.

The report’s principle author, Dagmar Nelissen, Senior Researcher and Consultant at CE Delft, talks to Maritime Holland about the findings.
Sustainable technologies are characteristically future-proof. When talking about sustainability in the maritime industry, it is crucial to look at technologies that have a potential to take this sector well into the next century.

Wind power is one example of a renewable, future-proof technology. However, using wind to propel a ship is not new; mankind has been sailing on wind-powered vessels for many centuries. In fact, the earliest image of a ship under sail is a painted artifact dating back more than 7,000 years that was found in present-day Kuwait. The difference is that modern techniques and innovations can harness the power of the wind far more effectively than traditional sails.

Results first, financing follows
The “Study on the Analysis of Market Potentials & Market Barriers for Wind Propulsion Technologies for Ships” was prepared by independent environmental research and consultancy organisation CE Delft together with the Tyndall Centre, Fraunhofer ISI and Chalmers University.

It was commissioned by the European Commission’s Directorate-General for Climate Action (DG CLIMA) whose aim is to lead the efforts to fight climate change at the EU and an international level.

“There has already been a lot published on the subject of slow steaming. And also about biofuels – about which there are concerns about the possible negative environmental impacts and about the availably of such fuels in the required quantities,” Nelissen says. “Wind propulsion, on the other hand, is hardly used – even though there are quite a lot of organisations and companies that are currently developing the technology. This, in combination with the fact that wind propulsion might have a large reduction potential, was the reason to carry out the study into the barriers and the potentials.”

Key results
“An important aspect of the study is that we used existing AIS route data over the period of one year for the sample vessels,” Nelissen notes.
Using concrete data from actual voyages significantly increases the level of trust in the results of the study. This is a crucial step in gaining access to financial investment: “We see this as a chicken-and-egg situation. Banks want to see test results before they provide investment, but the technology developers do not receive financing to be able to accomplish this research in the first place. Our proposal is that you need to break open this whole chicken-and-egg situation by creating trustworthy information. Then banks will be more prepared to give financing to development projects.”

Because the scope of the study was so extensive, the results gained are too extensive to consider in detail in an article of this size. In concise terms, rotors and rigid sails yield the best results: reaching potential fuel savings in double figures when used on large vessels.

Towing kites offer greater fuel savings on smaller vessels, and wind turbines exhibit the lowest savings. One notable result was that absolute savings of rotor and rigid sails increase with increased speed.
“This is a very important finding of the study. It implies that ships do not necessarily need to slow down for, at least some, wind propulsion systems to become cost efficient.”

“Should some wind propulsion technologies for ships reach marketability in 2020, the maximum market potential for bulk carriers, tankers and container vessels is estimated to add up to around 3,700 – 10,700 installed systems until 2030. The wind propulsion sector would then be good for around 6,500 – 8,000 direct and around 8,500 – 10,000 indirect jobs,” the study states.

The environmental impact of this increase in the amount of wind propelled vessels is estimated to be a reduction of around 3.5 – 7.5 million tonnes CO2 in 2030.

“Because this is a new industry, this is difficult to judge. These job numbers were calculated by comparing with the existing marine equipment sector,” Nelissen adds.
“But these results are only on bulkers, tankers and container ships. So theoretically the potential is higher, considering also the other types of vessels.”

The starting point
While the CE Delft study identified multiple barriers to the development and eventual uptake of wind propulsion technologies, three key aspects stand out. These were information about available technologies, access to investment and incentives to reduce emissions.
“There are now many options available to the various stakeholders,” Nelissen says. “The most important thing should be to establish a standardised method of assessing wind propulsion technologies. Once this starting point is crossed, then you can take on the actions.”

The full report, “Study on the analysis of market potentials and market barriers for wind propulsion technologies for ships” published by CE Delft on behalf of the European Commission, DG Climate Action, can be found and downloaded from www.cedelft.eu.