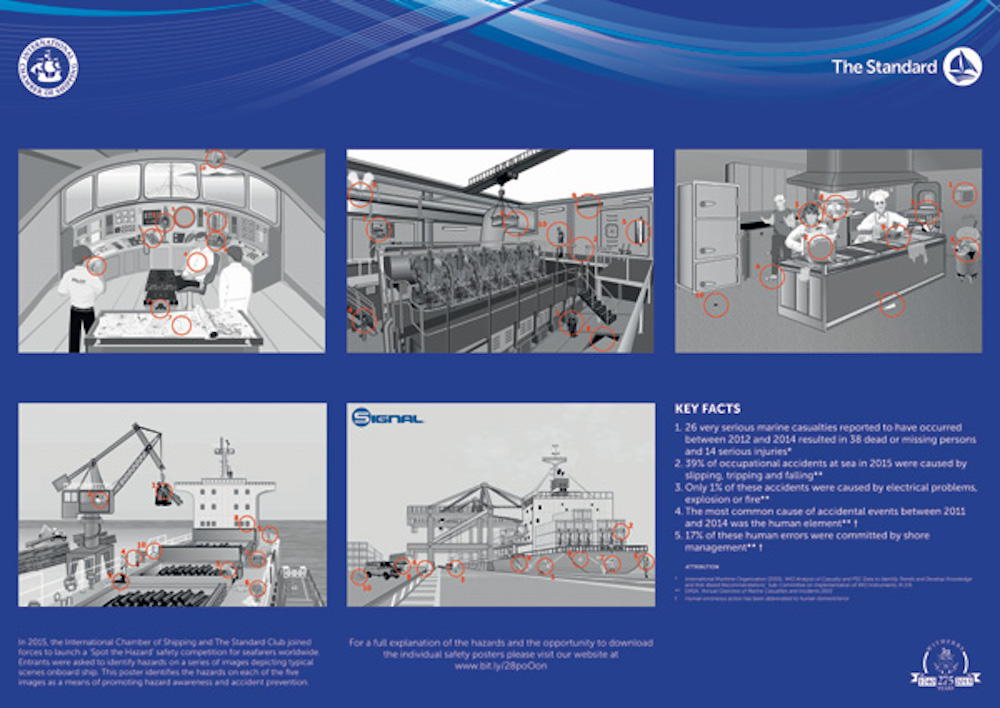 As part of a major initiative to promote hazard awareness throughout the shipping industry, the International Chamber of Shipping (ICS) and The Standard Club have issued free safety posters to shipping companies worldwide. The release of the posters marks the final stage of a campaign by the two organisations to promote hazard awareness with a ‘Spot the Hazard’ competition for seafarers.

The competition invited seafarers across the world to identify ten hazards within five typical scenes – bridge, deck, engine room, galley and port terminal. The level of engagement with the campaign was impressive. More than 1,300 entries were submitted by seafarers from 78 shipping companies, comprising a wide range of nationalities. The competition was also shortlisted for “Innovation of the Year” at the 2015 CIR Risk Management Awards.

Competition winners were those entrants who identified the most hazards correctly and whose safety ideas were considered to be the most original and potentially effective for the improvement of onboard safety. Each winner received US$2,000 in recognition of their achievement in beating off stiff competition from over 600 other seafarers.

Analysis of the entries has provided us with some interesting insights regarding engagement with the initiative and trends in the identification of particular hazards. Of all the hazards included on the five posters, the ‘over-scaled ECDIS display’ within the bridge scene was the hazard which was most often mistaken or overlooked in competition entries. This was not particularly surprising and is consistent with The Standard Club’s observation that the levels of ECDIS proficiency amongst crew varies. The results of the competition were encouraging, with many seafarers scoring top marks on each of the posters, yet every year there is a significant number of accidents that could have been prevented, so there is still work to be done in order to translate this understanding of what constitutes a hazard, into safe onboard working practices. The aim of new posters is to encourage everyone on board a ship to be responsible for its safety, by identifying hazards and understanding how they could escalate into serious incidents.

ICS Secretary General, Peter Hinchliffe, explained: “ICS was delighted to see the high level of engagement with this initiative. By encouraging seafarers to think about the potential hazards around them, the competition has surely helped to promote an effective safety culture in the global shipping industry, which is a longstanding goal of ICS. The intention now is for this new poster to be placed on board as many ships as possible as a means of promoting the critical importance of an awareness of basic hazards.”

The Standard Club Director of Loss Prevention, Yves Vandenborn, stated: “We consider this initiative to be a very successful example of how large maritime organisations can interact with seafarers to advance the cause of safety at sea. Our hope now is to ensure the spirit of the competition lives on by using these posters to remind seafarers of the importance of accident prevention as they go about their day-to-day tasks.”