A month after the sinking of the Sewol ferry, divers are still trying to find the bodies of 23 missing people. Of the 476 who boarded the ship, 276 are confirmed dead, making it one of South Korea's worst maritime disasters. This timeline explains what we know now about the tragic sequence of events.

Timeline of events
15 April, 21:00: The Sewol should have set sail on its regular overnight journey from Incheon to the volcanic island of Jeju at 18:30 on the evening of 15 April. It is delayed by fog and eventually departs at about 21:00.

According to the manifest, there are 476 people on board, 443 of whom are passengers, including a school party of 325 students and their teachers from Ansan high school. However, the number of total passengers may have been higher. 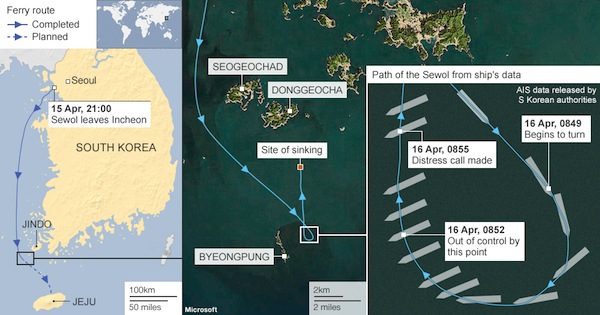 16 April: By morning the ship is sailing through a treacherous area of water near Jindo island when it makes a sharp turn and begins to list severely.

It is not clear why this sudden turn is made, but Captain Lee Joon-seok is not on the bridge at the time and an inexperienced third mate, Park Han-kyul is navigating.

The Sewol quickly begins to capsize.

16 April, approx 08:52: As the ship leans over, the first distress call comes not from the crew but from one of the students, a teenage boy who dials the national emergency number.

"Save us! We're on a ship and I think it's sinking," the boy tells the fire officer on land who takes the call.

08:55: A few minutes later, at 8:55, the crew calls for help, contacting Jeju Harbour Affairs. Transcripts reveal an increasingly desperate interchange between the ship and shore.

Meanwhile announcements are broadcast telling passengers to stay where they are. Mobile phone footage retrieved from the victims later shows frightened students in life vests discussing whether to obey or try to escape.

08:55 - 09:37: Harbour Affairs at Jeju and at Jindo island, much closer to the ferry's location, both urge the crew to get passengers ready for evacuation.

But Captain Lee seeks assurance that rescue is at hand. He later says he was concerned that people would be swept away by currents if they entered the swift cold water.

The crew are also trapped in the bridge by the angle at which the ship is tilted and by fallen containers, so cannot reach the passengers.

09:37: In the final communication, the crew says an evacuation order has been given and some passengers are escaping on the port side.

Over the next two hours, a total of 172 passengers and crew are rescued but many more are trapped inside as the ship slips beneath the waves.

The state of the ship
The Sewol's owners, Chonghaejin Marine Company, redesigned the ferry to create additional passenger space, after purchasing it from Japanese owners in 2012. 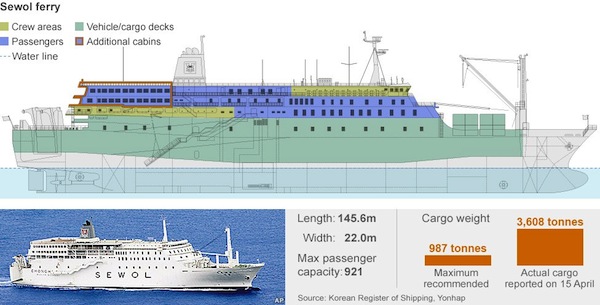 It passed a safety inspection by the Korean Register of Shipping with the proviso that it would have to carry more ballast water and less cargo to offset the extra weight at the top.

However, investigators are looking at reports that the ferry was routinely overloaded. An off-duty captain also said he had warned the ship's owner that it had become unstable.

When disaster struck it was carrying 3,608 tonnes of cargo including 108 vehicles while the recommended limit was 987 tonnes.

It had 580 tonnes of ballast water on board, only 37% of the legal requirement, making it dangerously unbalanced, South Korean news agency Yonhap said, citing investigators.

Investigators are looking at reasons the Sewol capsized

Officials took the ship's entire navigational crew of 15 into custody and made further arrests on shore. The captain and three other crew have been charged with manslaughter.

An interim investigation found that a sharp turn was the main cause of the sinking but the overloading of cargo and the lack of water in ballast tanks made recovery from its sharp turn difficult, Yonhap said.

Raising the Sewol
Divers are still searching for bodies in the sunken ferry and only when the last has been found can a salvage operation begin.

Experts propose using a floating dock which would be positioned underneath the Sewol in order to bring it to the surface.

Parts of the hull have started to collapse and although sea cranes are already on the scene, raising the ship is a complex operation, likely to take several months.