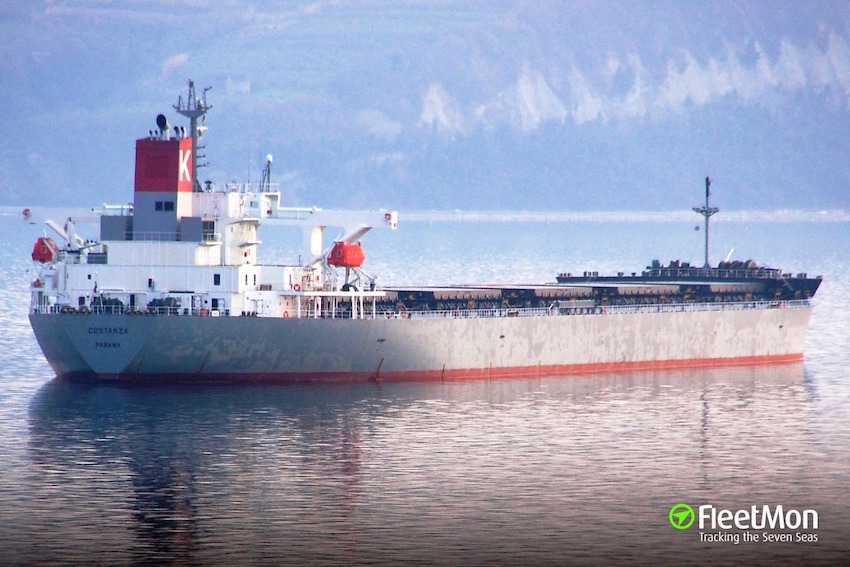 THE AUSTRALIAN Maritime Safety Authority on Friday (11 November) banned Panama-flagged bulk carrier Costanza from Australian ports for underpayment of the crew. AMSA said it boarded the ship in Port of Newcastle on 9 November as part of a routine port state control inspection and to investigate a complaint about underpayment of seafarer wages.

The International Transport Workers’ Federation had lodged the complaint with AMSA after an ITF inspector carried out a random vessel inspection at the port. AMSA said it found evidence the crew were owed around $108,000 in wages, and that most of the crew’s employment agreements had a salary amount less than the collective agreement for the ship. AMSA detained Costanza (IMO: 9414929) immediately for “serious breaches” of the Maritime Labour Convention 2006.

The ITF said in a statement the ship was detained at the Kooragang 10 wharf at Port of Newcastle. AMSA executive director of operations Michael Drake said the situation constituted a serious breach of the MLC. “Taking financial advantage of seafarers in this way is nothing short of exploitation,” Mr Drake said. “The majority of industry operators do the right thing by their seafarers, but for the few who do not, consider this a reminder that you will be held accountable. “We do not tolerate the exploitation of seafarers in our waters.”

The ITF said it found crewmembers aboard Costanza were also denied access to shore leave. ITF inspector Dan Crumlin, who boarded the ship, explained Covid restrictions that stopped seafarers going ashore in many countries during the pandemic were lifted in Australia almost three months ago. “There are people on that vessel who we understand have not been off the ship in about ten- and-a-half-months,” Mr Crumlin said. “We took our findings to AMSA as is the procedure and they have upheld our view and detained the Costanza until those wages are paid. “We’re looking into why the crew of the Costanza believed – or were told – that shore leave was still banned in Newcastle, when that’s simply not the case.”

The ITF said it arranged for crew access to free Wi-Fi via the Seafarer Connect service while the ship was in port. “Just being able to provide the means to call home or join a video call with family members on the other side of the globe is a massive boost to the mental health of seafarers who’ve been treated so poorly and basically imprisoned on this ship,” Mr Crumlin said.

According to AMSA, the vessel operator – Japan-headquartered Orient Line Corp – has since taken the required steps to ensure all seafarers on board are paid in full. AMSA said it has received confirmation the seafarers have now been paid their outstanding wages and the vessel has been released from detention.

Once the ship departs Newcastle it will not be permitted to approach or enter an Australian port for three months (until 9 February 2023).