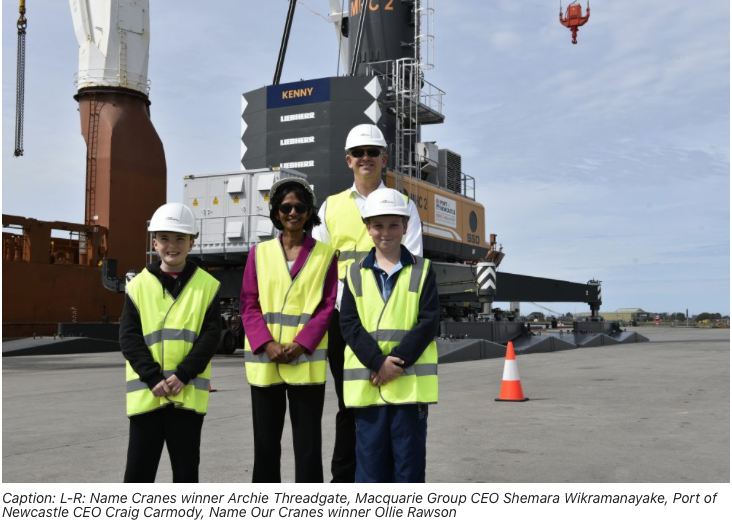 With the mobile harbour cranes in their final stages of commissioning, and terminal expansion underway, the cranes will commence cargo and container handling in September.

With an outreach of 54 metres, and a lifting capacity of 104 tonnes, Craig Carmody said the $A32.4-million crane investment marks a significant increase in an expanded and improved container, break-bulk and project cargo handling capability for customers at Port of Newcastle.

“For Port of Newcastle, the arrival of the mobile harbour cranes marks a significant step forward in our aim to diversify for the future,” he said.
It follows the announcement last November that the Port is partnering with Macquarie’s Green Investment Group to support the development of a hydrogen economy in the Hunter Region. The Port of Newcastle Hydrogen Hub, part of a broader clean energy precinct, will initially be underpinned by a large electrolyser and ammonia loop providing green product for domestic decarbonisation that is supported by a range of Project Partners including SnowyHydro, Jemena, Keolis Downer, Lake Macquarie City Council and Idemitsu.

The first stage of $A3 million feasibility study into the development of a green hydrogen hub at the Port has now been concluded.

Ms Wikramanayake said diversification represents a significant opportunity for the Port. “As the gateway to the second largest city in New South Wales, the Port will continue to play a key role in the future of the Hunter as a key region for economic growth,” she said.

Macquarie manages a 50 per cent shareholding in the Port of Newcastle on behalf of investors and is assisting the Port in its strategic realignment away from its historic reliance on coal export.

“The new container and bulk services initiative, together with the broader clean energy precinct, represents a significant opportunity for the Hunter region to diversify, decarbonise and support the development of jobs in emerging industries,” Ms Wikramanayake said. The Green Hydrogen project includes a partnership with the University of Newcastle to boost innovation and drive research commercialisation in the region.

Mr Carmody said the official opening of the mobile harbour cranes, which will begin operating next month, was an opportunity to reflect on the shared vision of the two organisations for an exciting future.

“When you are known nationally and internationally as the ‘world’s largest coal port’ change is always going to be like turning a large cargo ship in the harbour, a measured transition in tandem with the broader economy, but with the right tools around you the end goal can be achieved,” Mr Carmody said.