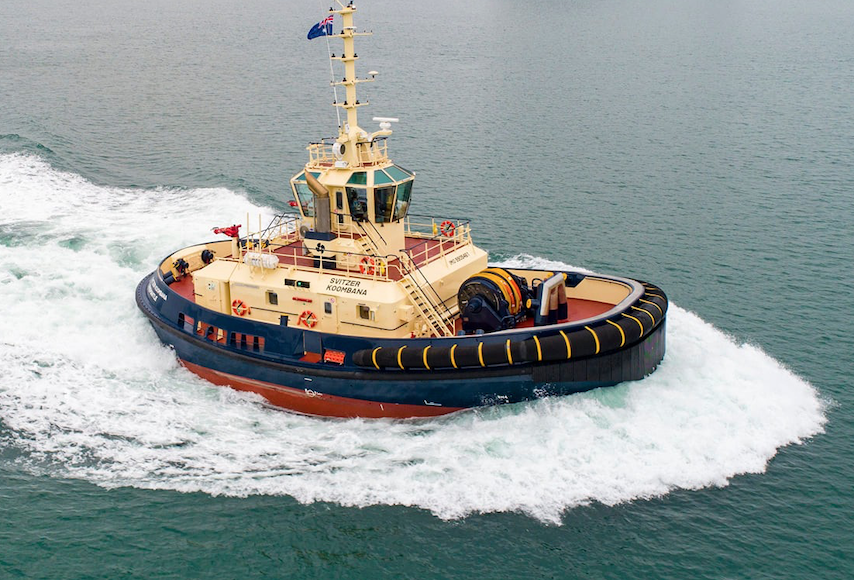 Damen Shipyards in Vietnam has built the first of two harbour tugs Svitzer ordered for its new towage services in Bunbury, Western Australia

Svitzer Australia expects to bring this new reverse stern drive (RSD) tugboat to the growing port, run by the Southern Ports Authority, in March 2022. SVITZER KOOMBANA and a sister tug were built to Damen’s RSD 2513 design, and have a bollard pull up to 85 tonnes ahead and 80 tonnes astern. RSD 2513 tugs have an overall length of 25 m, a beam of 13 m and a draught of 6 m.These 300-gt tugs have a speeds of around 13 knots and a patented Damen twin-fin skeg for course-keeping and predictable sailing in front of a vessel. At the beginning of 2022, SVITZER KOOMBANA underwent extensive sea trials in Vietnam to ensure all aspects of this vessel were safe and functioned as they should.

Both newbuilds are equipped with fire-fighting capabilities to improve safety in the Port of Bunbury.

Svitzer ordered these two RSD tugs after signing a five-year non-exclusive towage licence in September 2021 with Southern Ports for the port of Bunbury. This builds on Svitzer’s commitment to Western Australia’s regional ports, creating synergies with existing operations in Albany, Geraldton, Onslow, Fremantle and Kwinana. Svitzer started towage operations in Bunbury in December 2021 with its tugs SVIZER NANA and SVITZER NAIAD assisting a dry cargo shipinto the port. More than 17M tonnes of cargo, including minerals, wood products and grain, are imported and exported through the port each year.

In December 2021, Svitzer Australia participated in oil spill response training with the Pilbara Ports Authority in Western Australia. An exercise scenario was held at the Port of Ashburton simulating a tug grounding, resulting in an oil spill. During the training exercise, a response team deployed a boom to contain the oil and protect nearby ecosystems, such as the mangrove population in Four Mile Creek. Also involved in the training exercise were energy group Chevron and the Department of Transport of Western Australia. In July to December 2021, Svitzer tugs were involved in turn-on-arrival validation trials of an ultra-large container ship at the Port of Fremantle. Tug masters worked with Fremantle pilots to dynamically turn these container ships within the constrained width of the inner harbour turning basin. These exercises followed extended simulation studies and required new high-precision portable pilot units to be adopted.

There was also a review of operational parameters, including vetting vessels prior to the turn-on-arrival trials being approved for each vessel. Current procedures at Fremantle only allow vessels between 310-336 m to turn during daylight hours. Post-trial processes will be completed within Q1 2022 to make turn-on-arrival business as usual where possible and required.