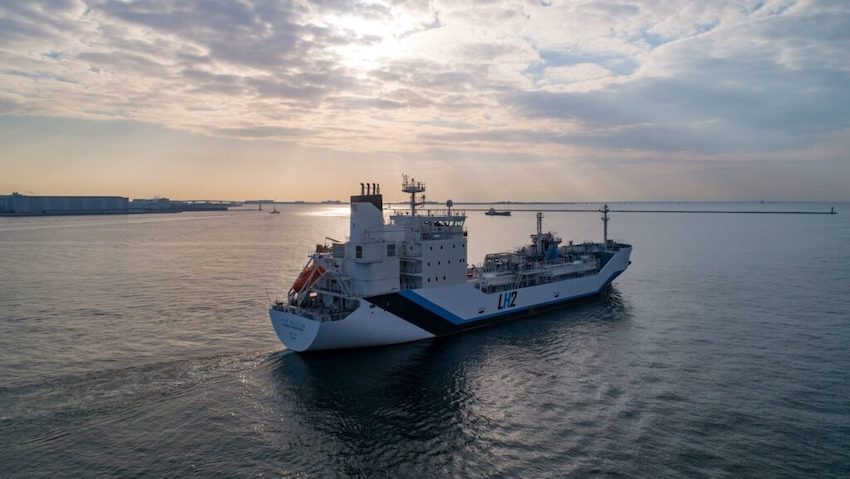 The Suiso Frontier, the world’s first liquefied hydrogen carrier, will set sail from Australia to Japan with its first LH2 shipment, marking a milestone for the HESC project.

A ceremony at Port of Hastings marked the Suiso Frontier‘s arrival from Japan to Australia. Back in December, the world’s first LH2 carrier left Japan to pick up its first cargo in Australia.

The vessel will transport the hydrogen from the Port of Hastings in Victoria’s Mornington Peninsula to Kobe, Japan.

Moreover, this event represents a key milestone in the Hydrogen Energy Supply Chain (HESC) Pilot Project. Therefore, it signifies the start of a major new energy export industry for Australia.

The HESC pilot is the first project to make and transport LH2 between two countries by sea. It is developing a complete H2 supply chain; creating hydrogen gas via the gasification of Latrobe Valley coal, transporting it to the Port of Hastings for liquefaction, and shipping it to Japan.

The vessel is to deliver the first shipment later this year. This is to particularly demonstrate that making, liquefying, and transporting H2 is possible.

Japanese shipbuilder Kawasaki Heavy Industries built the Suiso Frontier in 2020 under the CO2-free HySTRA membership. To remind, KHI, Iwatani, Shell, and Electric Power Development joined together under HySTRA to promote hydrogen as a fuel source.

The 8,000 tonnes ship can transport large quantities of hydrogen over long distances by sea. Here, the liquefied hydrogen is at 1/800 of its original gas-state volume, cooled to –253°C.

In addition, the ship features a diesel-electric propulsion system and can achieve a speed of 13.0 knots. The ClassNK-classed vessel has the capacity to carry 25 people.

The Australian government says that hydrogen is a priority technology for its Low Emissions Technology Statement. So, the HESC pilot is an important part of growing Australia’s H2 export industry.

This Australia-Japan HESC partnership claims it is at the cutting edge of creating new technology, cleaner energy, and jobs for both countries. Also, the 225,000 tonnes of CO2-neutral LH2 produced by HESC in a commercial phase will contribute to reducing global CO2 emissions by some 1.8 million tonnes per year.