HMAS Otama listing, at ‘imminent’ risk of capsizing or sinking 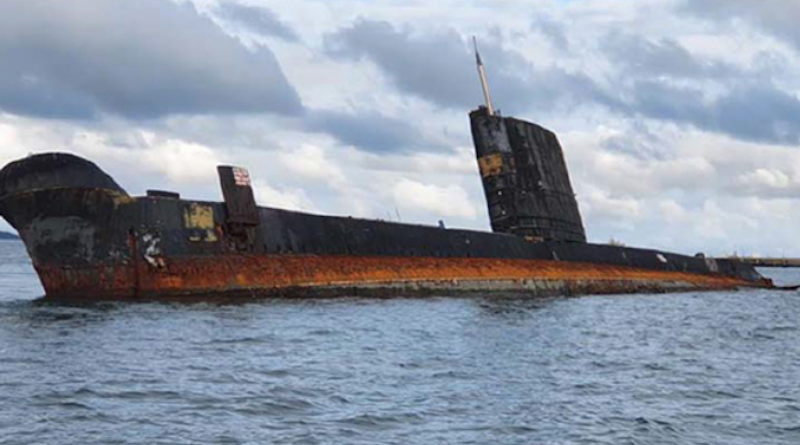 An emergency direction has been issued by Maritime Safety Victoria warning that HMAS Otama is at “risk of capsizing or possibly sinking imminently”. The submarine, currently moored 800 metres north of Crib Point refinery jetty, is listing significantly to the starboard side.

An exclusion zone has been established by Maritime Safety Victoria prohibiting non-authorised personnel from entering within 200 metres of the stricken vessel. A source has told The News that the submarine has suffered a catastrophic failure of the ballast tank on the starboard side and is taking water. It is believed the rupture of the tank is due to rust and wear. The situation was exacerbated by wild weather earlier in June. Contractors were last week attaching air bags to stabilise the vessel moored in waters managed by Parks Victoria. Buoys were being used to keep boats well clear.

“We have spoken with the owner of the vessel as well as key stakeholders to discuss issues surrounding the vessel and ways it could be stabilised in its current location,” Parks Victoria regional director marine and maritime, Jo Richards said. “The stabilisation may include attaching inflatable fenders which could allow the Western Port Oberon Association to work through options for the vessel’s future in light of its obvious deterioration.” Boaters also reported an oil spill around the vessel on Wednesday.

Former Port of Hastings harbour master Captain Dick Cox OAM said there was no oil left on board when the Otama was moored in the bay in 2003. “All the oil was cleaned out prior to its arrival in Western Port with probably just some grease and lubricants [left] on board,” he said. “The worry is [the sub] sinking with 500 tonnes of lead-acid batteries on board. “It is not in the shipping channel, which is in Port of Hastings-controlled waters, but in the Parks Victoria-controlled waters.”

Her Royal Highness Princess Anne commissioned HMAS Otama in 1978. It is said to be the last of the Oberon class submarines in existence. The Western Port Oberon Association has plans to display it as a tourist attraction. The $15 million project would involve establishing a maritime museum at Hastings based around the submarine. (“Top Liberals to steer sub project” The News 30/5/17). The association’s Max Bryant said discussions with Parks Victoria about salvaging the vessel had taken on a greater urgency since it started listing. “All of a sudden people are taking notice of it,” he said, adding that notional revenues of $80 million had been ‘lost’ over time in the stalled bid to make the sub a museum focal point. “We’ve got to fix it,” he said. “Once it is stable they can carry out repairs.”

Parks Victoria said it was also working with the Port of Hastings Development Authority, Department of Transport and Victorian Regional Channels Authority about the “issues the vessel presents”.

Maritime Safety Victoria Emergency Direction: Keep your distance from listing submarine ex-HMAS Otama
23 June 2021 Mariners are advised that the Ex-HMAS OTAMA (Oberon class submarine) approximately 800 metres north of Crib Point refinery jetty in Western Port has listed significantly and has the risk of capsizing or possibly sinking imminently.
An exclusion zone has been established for the waters around the Ex-HMAS OTAMA currently at approximate position 38° 20.477’ S, 145° 13.445’ E.
The Director Maritime Safety (as Delegate of the Director, Transport Safety) considers that this is an emergency, and that because of this emergency, persons who are not authorised should not enter or remain in the exclusion zone.
Emergency Direction - Persons, other than those authorised by Parks Victoria, the Director, Transport Safety (or delegate) or the Victorian Regional Channels Authority, must not enter or remain on the waters within 200 metres of the Ex-HMAS OTAMA where she rests, from the time of publication of this notice until further notice.
Mariners are directed not to enter or remain in the waters in the Exclusion Zone. This direction applies to waters in the Exclusion Zone.
This direction is published within temporary Notice to Mariners 202 of 2021
Update: 25 June - Buoys have been added to mark the exclusion zone – temporary Notice to Mariners 205 of 2021.
Enquiries related to this matter are currently being managed by Parks Victoria as the lead Victorian Government agency