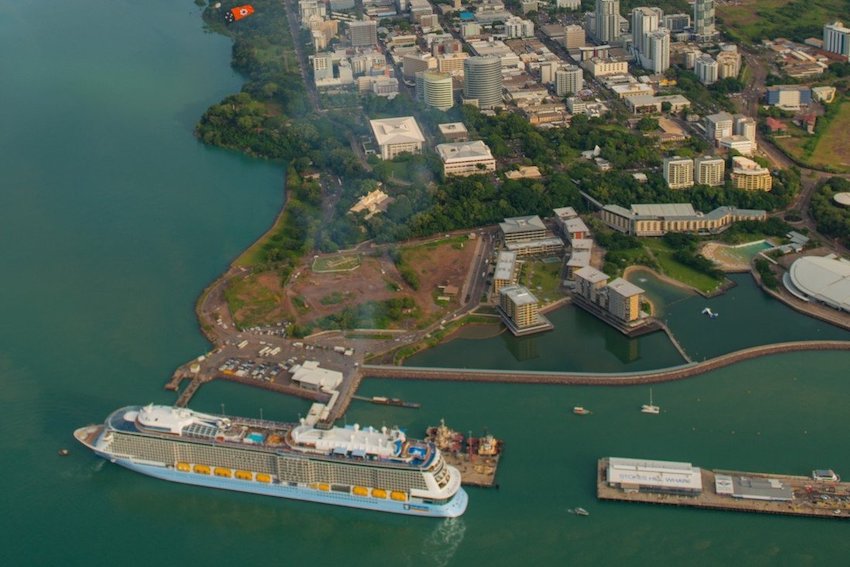 The Chinese company Landbridge does much more than just running the Darwin Port in the Northern Territory (NT) of Australia, as it has been gradually engaged with local community at various levels, said local workers at the port. Kerri Small, who is in charge of Work Health, Safety, and

Partnerships at the port, told Xinhua recently that the company is also sponsor of the Darwin Festival and the Darwin Film Festival, as well as supporter of various local sporting events, and host to student excursions. The company has also increased activities in the area of skill training for indigenous teenagers and school leavers. "(Local) people recognize and understand Darwin Port and Landbridge well," she said.

LOCAL RECOGNITION
According to an announcement by the NT government in October 2015, the Darwin Port was leased for 99 years to the Landbridge Group, a private company based in Rizhao city in eastern China's Shandong province.

Landbridge has sponsored the Darwin Festival for the past four years, which falls in August when the country is in winter and people would travel to the warmer north to enjoy sunshine, as well as the Darwin Film Festival, which "supports local filmmakers and new Australian and international talent to springboard and showcase their movies or short films for early preview and screening," she said.  "These festivals are really important for Darwin," Small continued. "They attract a lot of local interest and promote tourism." Each year the port also receives about 12 schools for excursions, some of the students are from indigenous communities as remote as in Katherine or Tennant Creek, and some are even from New South Wales and Victoria.
"They've chosen Landbridge Darwin Port as a work place of interest to come and visit us," Small said. "Our aim is to give these students some exposure to what we do as a port operator and the types of roles and responsibilities you can have within the organization," she added. For some young people, Landbridge has provided employment opportunities in the form of apprenticeships. Three years ago, two new apprentices commenced with Darwin Port, including a young indigenous boy from the community of Jabiru who wanted to come to the city, get a job and build his grandmother a house later. He won the position in metal fabrication out of 30 applicants, and was awarded 2020 Northern Territory Young Aboriginal Apprentice of the Year. He will complete his four-year apprenticeship next year. "When he finishes his apprenticeship he will be a fully qualified metal fabricator, and he'll have the opportunity to perhaps remain with Darwin Port, or go and get a job anywhere and continue to earn quite good money as a qualified tradesman," Small said.

She said it was important "in a very competitive world where employment is not that easy, especially at the moment with COVID-19." "Our intention is to continually grow these career prospects and training ground opportunities for local people," she said. Small noted that Landbridge enjoyed a good reputation among the locals during the past six years. "I have been raised here locally all my life, and I have a lot of family and friends here. I have not been approached with negative comments about Landbridge Darwin Port. It's always been very positive," she said. The woman, who has worked at the port for 27 years, said she's happy to see the successful transition of Darwin Port from the NT government to Landbridge.
"Landbridge has provided a lot of opportunities for its workforce, a lot of growth in skill including the chance to multi skill and cross-over into other operations and departments," she said. Workers feel connected here and happy with workplace culture here, which in turn helps improve operational efficiencies for the business, she added.

DEVELOPMENT ENGINE
Her view was shared by Darren Lambourn, CEO at the Darwin Port Operations Pty Ltd, which is part of Landbridge. Having worked at different ports, Lambourn told Xinhua that he likes his job at Darwin Port. Talking about the transition, he said: "it's about getting out the old government mindset and getting more commercial, about productivity and getting more efficient at what we do and also investing in our people's careers, so giving them skills they may not had before." According to Lambourn, from 2015 to 2020, the Gross Registered Tonnage (GRT) of Darwin Port increased about 71 percent, from 17.48 million to 30 million, while the LNG/LPG (Liquefied natural gas/petroleum gas) vessel visits increased 261.67 percent from 60 to 217. Landbridge upgraded infrastructure at the port, and the development of the Darwin Port could benefit the city and even the entire territory, he said. "Through...the growth of the port, people want to invest in the territory and want to invest in Darwin. That means more containers, more people, more food, more clothing, more furniture...It's just a growth place," said Lambourn.

UNWARRANTED SCRUTINY
However, the lease of Darwin Port has come under renewed scrutiny with the Australian government. Not long ago, the Australian government canceled cooperation agreements under the framework of the Belt and Road Initiative (BRI) between the government of Victoria state and the Chinese side. Mike Hughes, vice president of Landbridge in Australia, said in an opinion piece published on the Australian Financial Review last month that after spending most of his career working for multinationals investing in different parts of the world, he has never seen "a company as badly treated as Landbridge Group in Australia".

"In the months and years...sideline critics have continued to carp about the lease. That is despite a Senate inquiry in which senior officials from Defence and the Australian Security Intelligence Organization (ASIO), both clearly said they had no issue with Landbridge," he said. "In almost six years I have yet to hear a single concern about Landbridge operating the port that has merit," he said. He said that noises about the Darwin Port could send a worrying message. "Having observed the past five years of treatment meted out to Landbridge, other prospective investors might consider putting their money elsewhere," he said. This is not something that people like Kerri Small would like to see, who said that her colleagues enjoyed work at the Landbridge."They come and join the port, and they like what they're doing with Landbridge, and they feel valued," she said. "I am very very happy as an employee of Landbridge Darwin Port," she added.