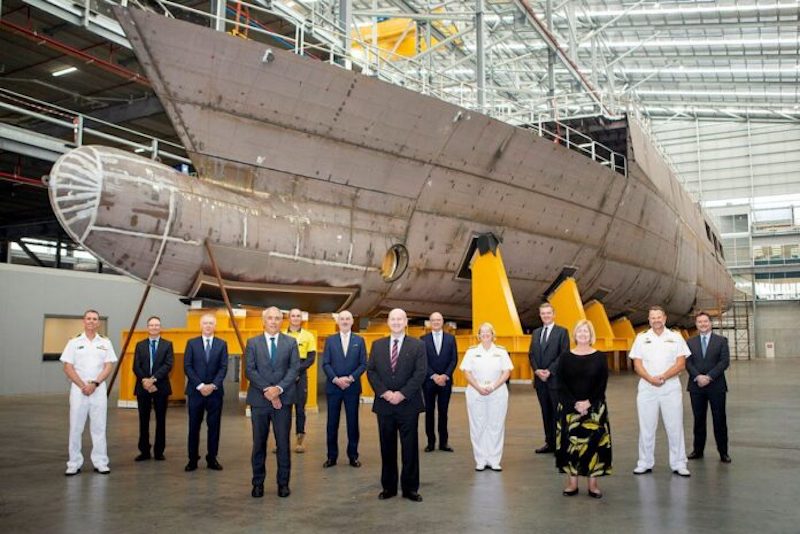 The press release concerning the launch of the new vessel, as follows;
The OPV ENTERPRISE brings together Commonwealth and defense industry teams under one roof to build and sustain the Royal Australian Navy’s new Arafura Class OPVs, the first two of which are being constructed in South Australia, with the remaining ten vessels to be built in Western Australia.“It is great to see the co-location of Commonwealth shipbuilding and sustainment personnel and Luerssen, CIVMEC, and Raytheon industry partners delivering outcomes for our Navy,” said Deputy Secretary National Naval Shipbuilding, Mr. Tony Dalton.Head Maritime Systems,

Rear Admiral Wendy Malcolm said the OPV Enterprise establishment represented a significant milestone under the Continuous Shipbuilding Plan.“The launch marks a critical step towards the implementation of Plan Galileo, an ambitious Future Maritime Sustainment Model which ensures our sustainment organization engages with acquisition teams early in the build process,” Rear Admiral Malcolm said.“Evolution of our asset management, supply chain, infrastructure, improved commercial models, and professionalization across the enterprise will be key to success“This process ensures sustainment needs are considered during the design phase and brings together Defence, primes, small business and service providers to facilitate sustainment of our naval vessels from strategically located ports around the country. “Not only does this promise to deliver long-term jobs to West Australians and confidence for the industry to invest in Perth, but it will ensure our Navy can meet all Government tasking to protect our nation’s security.”The Arafura Class OPVs, which replace the Armidale and Cape Class patrol boats, will be the Australian Defence Force’s primary asset for maritime patrol and response duties and will primarily undertake constabulary missions.

The Arafura-class is based on the Lürssen-designed Darussalam-class, operated by the Royal Brunei Navy. Each vessel has a gross displacement of 1,640 tonnes and measures 80 meters (260 ft) long, with a beam of 13 meters (43 ft) and a draft of 4 meters (13 ft).
Propulsion power is from two MTU 16V diesel engines rated at 4,440 kilowatts (5,950 hp), which drive variable pitch propellers and give a top speed of 22 knots (25 mph).
MAN diesel engines generate shipboard electrical power.
The ship’s range is about 4,000 nautical miles (7,400 km), with an endurance of 21 days.
The standard crew complement is 40 sailors, though up to 20 more can be berthed if required.
The ships will be deployed with space available to install container-mounted systems such as aircraft support and sensors; if fully utilized, the gross displacement could increase to 1,800 tonnes. Shipboard armament consists of a single 40 mm gun and two 12.7 mm guns.
Each vessel carries two 8.5-meter (28 ft) rigid inflatable boats and a single 10-meter (33 ft) boat, which is intended as the primary means of deploying offensive force in the ships’ border patrol role. A single unmanned aerial vehicle is carried and deployed from an open utility deck.
Two separate electro-optic targeting systems and three radars are installed and managed by the Saab 9LV system.
To allow the ships to operate in conjunction with allied international forces, each vessel is equipped with a unique electronic identifier transponder that provides communication via the Link 16 network.