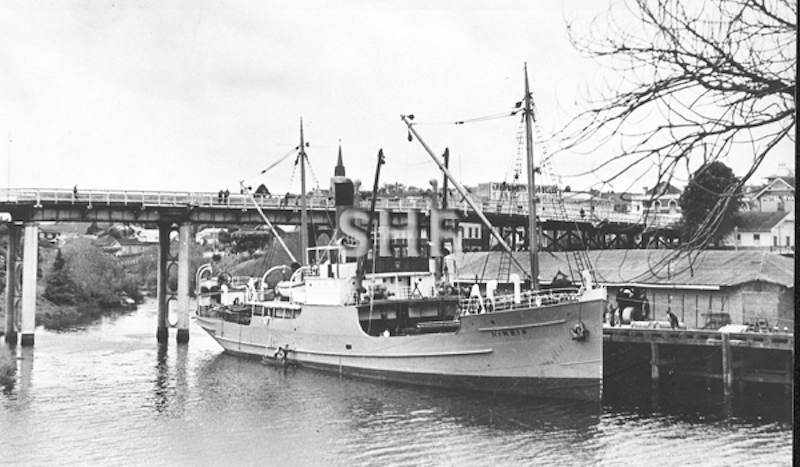 A  Significant Local Anniversary - 80 Years
Again we gather to meet in this beautiful tranquil setting ,at the conclusion of what has been a truly dramatic year for us all. The peace and serenity that we are experiencing today, is in complete contrast to what occurred , close off shore from Norah Head Light, on this very day ,80 years ago, the 5th of December 1940.

A Shipping Tragedy 80 years that brought home the reality of World War 2, to this area
It is 80 years since that dramatic and unexpected sinking as a result of striking a floating explosive mine by the small modern North Coast Steam Navigation coaster Nimbin, heading south from Coffs Harbour anticipating a routine arrival in Sydney Harbour, berthing that late afternoon at the Company’s Darling Harbour finger piers.(wharves)

One can visualize the feelings of anticipation, of those 20 crew members, on this quiet, sunny afternoon, with just a few miles still to travel. They together with their families, would have been eagerly looking forward to their safe arrival home, after just another routine ‘round voyage from the North Coast’.

Minesweeping Preparations for War
The war in Europe had been under way for over a year, but Europe seemed so far away from Australia in those days, a five week ocean voyage on a Passenger ship. The Navy Department following the outbreak of the war in Europe in September 1939, had by January 1940 requisitioned five of Nimbin’s North Coast Company sister ships, (Orara, Uki, Nambucca, Gunbar and Coolebar) each manned mainly by navy Reservist civilian sailors in Naval uniform, for minesweeping duties around Australia’s coastlines. The emphasis placed on mine sweeping by the Navy, had originated from the WW1 experience of German Commerce raiders (converted Merchant ships, mainly manned by German Merchant Navy crews), visiting our shores, secretly laying underwater mines around our strategic sea-lanes, with the anticipated probability that it could be repeated. Their initiative was certainly correct

The German Commerce Raiders
The German Commerce Raider Pinguin, undetected on the night of the 8 October 1940, unobtrusively laid four mine fields, between Newcastle and Sydney. This was a busy shipping route between two of the major industrial port cities, involved in the war effort. Newcastle Port, was also the major coal export port for coastal distribution to the rest of Australia, for their respective Gas works. It was also the major coal bunkering port, for the majority of overseas , coal burning steamers, visiting the East Coast. The great majority of the Australian manned coastal fleet, were coal burning steamers, an example being the BHP Shipping Fleet, comprising eight steamers, each of which were Coal burners. The first realization that German Commerce raiders had been active, in Australian waters was the sinking of the British Federal Line Steamer, Cambridge (an ex German WW1 war reparation ship, transferred to the UK in 1919), which was mined off Wilson’s Promontory on 7 September 1940.

Nimbin Sinking
Suddenly, at 3.20 pm, 5 December, Nimbin experienced a violent explosion, started sinking by the stern, and disappeared in just two minutes. Seven of the ships company, were lost including the Captain, 1st Mate, two AB’s and what was probably the Engine room Team on duty below, the 3rd Engineer and two firemen/greasers. With the ship sinking so quickly, the 13 remaining survivors, would have been unable to lower the lifeboat in such quick time and had to swim for survival , clinging to the floating timber, until they were picked up after two and a half hours, in the water by her sister ship Bonalbo. It was not realized for some time that the explosion was the result of striking a mine, and the Bonalbo was probably, lucky that she did not meet the same fate, due to operating in the same area, unaware of the lurking underwater dangers. Nimbin was unlucky, as a small ship she would have been only of shallow draught of 10 feet 6inches (about 3 metres), a case of wrong place wrong time. One can only imagine the shock and disbelief, of the survivors when they arrived in Sydney, that evening having lost everything in two minutes, and following a head count the loss of their shipmates. In those days there were no support systems that we now take for granted, in modern society . It was a case of return to work as soon as possible, to avoid being tarred with the ‘white feather’ treatment, that some Australian Merchant seafarers , were subjected to, by the civilian populous, following their rescue from ships sunk or seriously damaged. It is difficult for we in attendance here today, the majority whom, have been born post war, to understand the trauma that happened, so close just those eight nautical miles away. The War had arrived on Australia’s back door in earnest and unfortunately soon after with the entry of Japan even closer to home.

Two other WW2 incidents have resonated with me, relative to International Merchant Seafarers’ and the incidents and tragedies that have occurred, which are now long forgotten.

The ships of the American Merchant Marine, which as a result of their amazing Wartime emergency ship building effort, using a standard British design, built the 2,710 Liberty ships, that saved the World from succumbing, to Nazi Germany’s intended world domination. It is interesting, that the first American ship, to be sunk by enemy action, during the WW2, actually occurred in Australian waters. This was the motor ship City of Rayville, which struck a mine off Cape Otway, Victoria almost a month earlier on 8 November 1940, and over a year before the then neutral America entered the war officially The minefield was laid by Pinguin’s associate Passat, a Norwegian tanker which Pinguin had captured, in the Indian Ocean a few weeks previously, and converted into a minelayer. City of Rayville sank in 35 minutes, with the loss of just the 3rd Engineer. The survivors were later the guests, of the Governor of Victoria! Despite being neutral, the USA shipyards were starting to build a fleet of 60 Coal burning steam ships, for the British to operate referred to as the Ocean class, as a lend lease venture. 10 of these Ocean class that survived operated on the Australian coast, immediately post WW2 in the ‘Black and Tan’ iron ore/coal trades , passing Norah Head, on many occasions, heading to and from the Newcastle BHP Steelworks and coal loaders

A poignant reminder particularly to me, of the enormous loss of British and Allied Seafarers during WW2 was when laying a wreath in London at the British Merchant Navy War Memorial, on Tower Hill where all the British ships lost and the names of those lost are inscribed. One ship that particularly caught my eye and epitomized the dreadful loss of Merchant Mariners in time of war. It was that of the brand new British flag cargo ship, Nottingham bound for Australia and New Zealand via Canada which was torpedoed, just six days into her maiden voyage, from Glasgow on 7 November 1941 in the Winter North Atlantic , south of Greenland with the loss of her total complement of 61 persons including 5 gunners, and a Port Line Captain as a passenger. No doubt, some of those named called Australia or New Zealand home.

The British and Allied Merchant Navies lost over 36,000 dead , (numbers can vary slightly )both men and women , nearly 25% of its work force . This included 6,000 Indians 1,271, Canadians , over 400 Australians , and 120 New Zealanders. America arriving late in the war lost 11,000 .Merchant Mariners and their ships have undertaken the heavy lifting in all wars ,especially WW1 and WW2 .It still continues to receive scant recognition by the ‘powers that be ‘in such commemoration services as the recent Canberra Remembrance Day service and token representation in the displays at the Australian War Memorial.