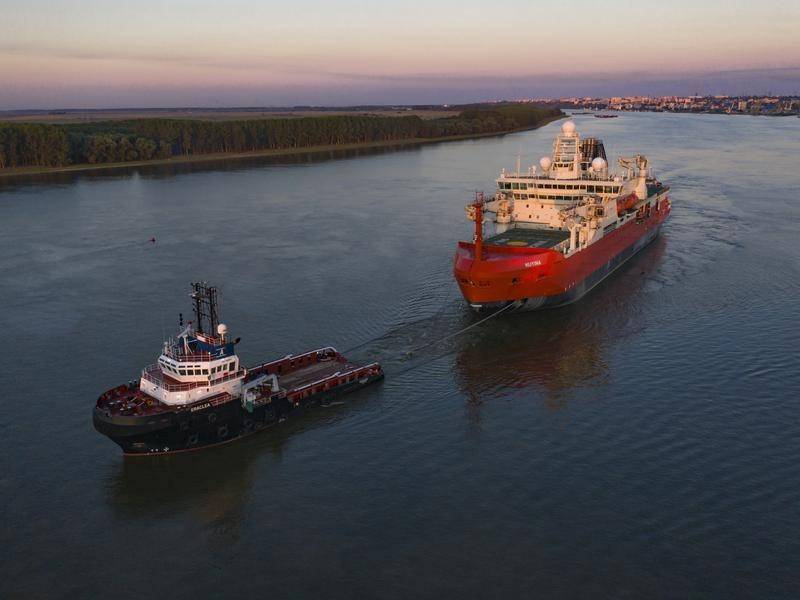 Coronavirus restrictions in Europe have forced Australia's new icebreaker to be moved thousands of kilometres for final sea trials.

The $529 million RSV Nuyina was on the verge of being completed at a shipyard in Romania but specialists have been unable to reach it due to travel bans.

The ship is being towed 6800km by tug to a port in south Holland for commissioning.

"We were almost on the home straight and to have to move the ship is quite heartbreaking," said Rob Bryson, Australian Antarctic Division manager of assets and infrastructure. "We can't actually celebrate the finalisation of the ship together (in Romania)."

The 16,300-tonne ship has active propulsion and power systems but must be towed because it is not registered or fully tested.
It will travel through the Black Sea, Mediterranean Sea and Strait of Gibraltar before reaching Vlissingen in late August.

Teams of installers from western Europe will be able to access the ship for the commissioning of propulsion, electrical and navigation systems.

It has already had an unexpected hurdle on its journey, copping a scratch in the Danube River when it hit the riverbank avoiding a pontoon in the waterway.

"(It has) a reinforced steel hull designed to crack through sea ice, so while this is the ship's first scrape, it certainly won't be its last," Mr Bryson said.
It is expected the RSV Nuyina will arrive in Hobart in the middle of 2021.

It will replace icebreaker Aurora Australis, which completed its final Antarctic summer earlier this year after 31 years in the role.

The AAD has contracted another ship, the MPV Everest, to sail south this summer.