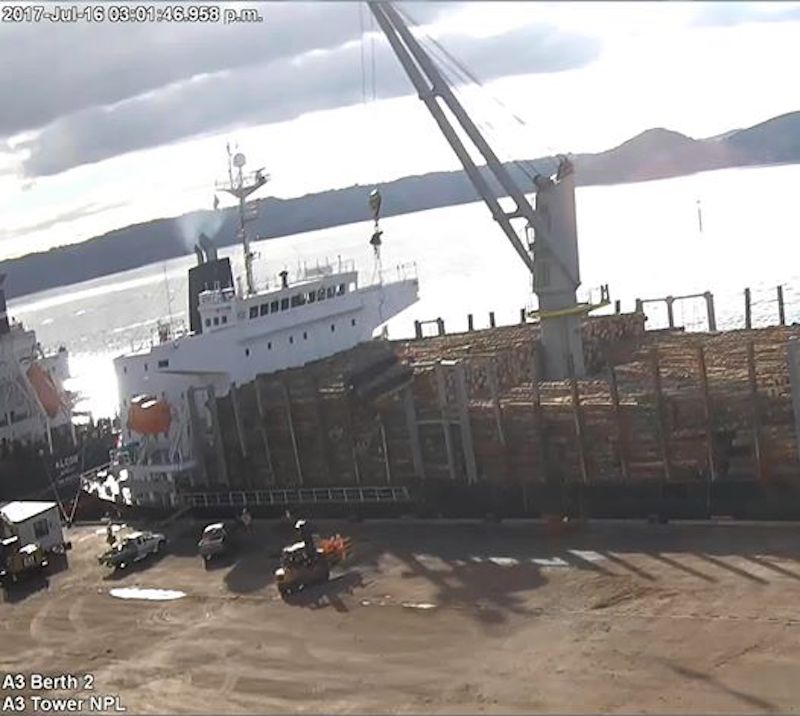 Tauranga-based stevedoring company, C3 Limited, was fined $240,000 by the Auckland District Court yesterday after a 15 tonne excavator was dropped from a ship’s crane, narrowly missing five workers on the wharf below.

“This was seconds away from five workers almost certainly being killed,” Maritime NZ Northern Regional Compliance Manger, Neil Rowarth, said. “The five workers had been in the drop zone moments before the excavator fell from the crane. “The incident happened because C3 did not adequately train some of its stevedores for working around cranes. They did not clear the drop zone below the crane and allowed the excavator to be loaded incorrectly onto the crane. “Cranes can be dangerous and people working with them must be properly trained.”

The incident happened at Northport in Whangarei when the log carrier, Aster K, was being loaded on 16 July 2017.

C3 pleaded guilty to one charge under the Health and Safety at Work Act of exposing people to risk of death or serious injury (section 48).

Excavators are often loaded onto log carriers to help move and stack logs in the holds. In this case, loading had been completed and one of the ship’s cranes was being used to unload the excavator onto the wharf. As loading the logs had finished the excavator’s driver had left the worksite. However, he had not correctly positioned the excavator’s boom so it could be safely lifted by the crane.

Meanwhile, four workers from a company providing biosecurity treatment for the logs and a welder doing repairs on the side of the ship were in the drop zone where the excavator would fall if the lift failed. None of the five were warned that the excavator was about to be lifted and there were no controls to ensure that they, or anyone else, was clear of the drop zone. The four biosecurity workers were in a fork hoist when one of them saw the excavator being lifted and moved by the crane. He immediately told the driver to reverse. At the same time, by chance, the welder left the side of the ship to fetch tools from his vehicle.

Seconds later the excavator fell off the crane and crashed down where the five workers had been.

“It was sheer good luck that no one was seriously injured or killed,” Mr Rowarth said. “This is a striking example of employers’ responsibilities to provide good workplace training and safe work practices.