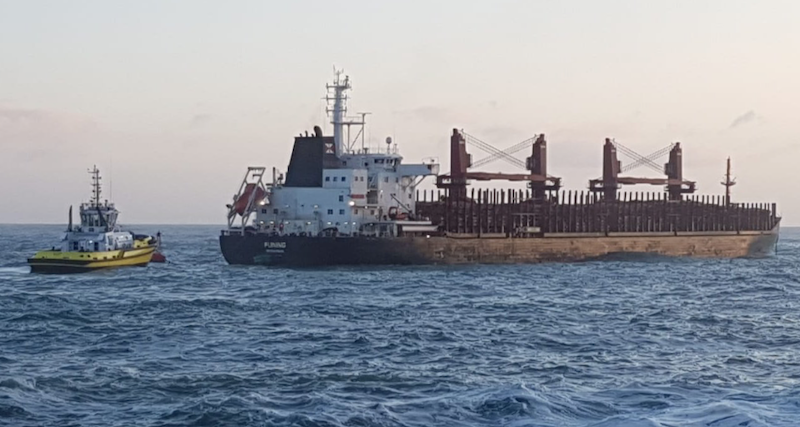 A Singaporean-registered log carrier has suffered engine failure in the shipping channel at Port of Tauranga between Mauao (Mount Manganui) and Matakana Island, New Zealand.

Without power, the bulker could not steer and in drifting due to the wind and the tides it snagged the chains holding one of the buoys marking the shipping channel. The tide and currents then pushed it to the other side of the channel, where it stopped near Mauao.

Tugs were sent to the vessel’s assistance and were able to tow it to deeper water and the safe anchorage outside the harbour.

Maritime New Zealand Deputy Director Safety and Response Systems, Nigel Clifford, said it is hoped divers can inspect the vessel in the morning of 7 July, weather permitting. Poor weather and sea conditions prevented the inspection to be carried out on 6 July.

After the inspection, a decision will be made about the need for any repairs and when the vessel can safely continue its voyage to China, according to Maritime NZ.

There are no reports of oil or other pollution from the vessel nor of any injuries to its 20 crew members, Maritime NZ added.