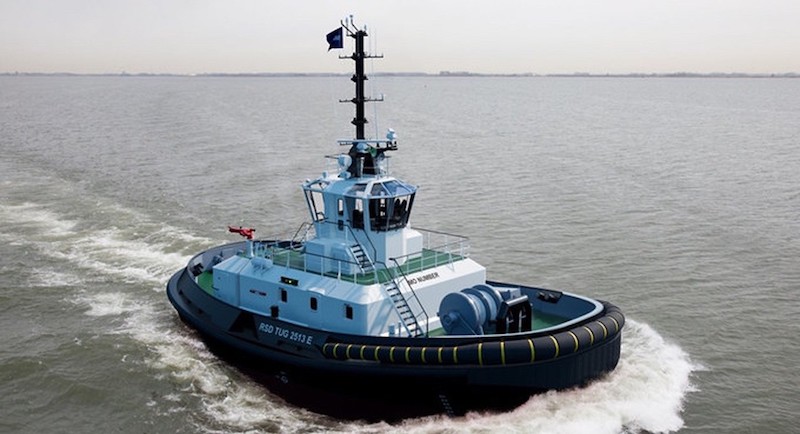 It was chosen from around 3000 name suggestions which included ideas such as Tuggy McTugface, Ashley Bloomfield, Electric Disco Biscuit, The Fighting Queen of Covid, Doug and many more.

The port narrowed down the final four names with Sparky (slang for electrician, also sparking change) decided by a public vote from Hiko (to lead, escort), Arahi (electric) and E.T (electric tug).

“In 2019 we announced that we were buying an electric tug, the first in the world, as part of our effort to become zero emissions by 2040,” Ports of Auckland chief executive Tony Gibson says.
“That’s a pretty big deal. Before we came knocking, tug builders weren’t even thinking about electric tugs – but our persistence and the innovation of Dutch company Damen made it a reality.”
“It’s a big deal for us, but it’s also a big deal for New Zealand that we’re leading the way in this innovation. So, we wanted to share that with the country, and that’s why we asked Kiwis to come up with a name,” he says.
“The most popular name sent in – by a long way – was Sparky. When it came down to the final vote, it was the same; nearly half of the over 8000 people who voted picked ‘Sparky’.
“We think it’s a fitting name. It’s fun, full of energy, and memorable – just like our new tug. “We look forward to welcoming ‘Sparky’ to Auckland next year,” Gibson says.

Sparky is being built in Vietnam by Damen Shipyards. The steel cutting ceremony was held last week and the keel is expected to be laid down in July. The tug will take around a year to build and after testing will be delivered to Auckland in late 2021, possibly around August.