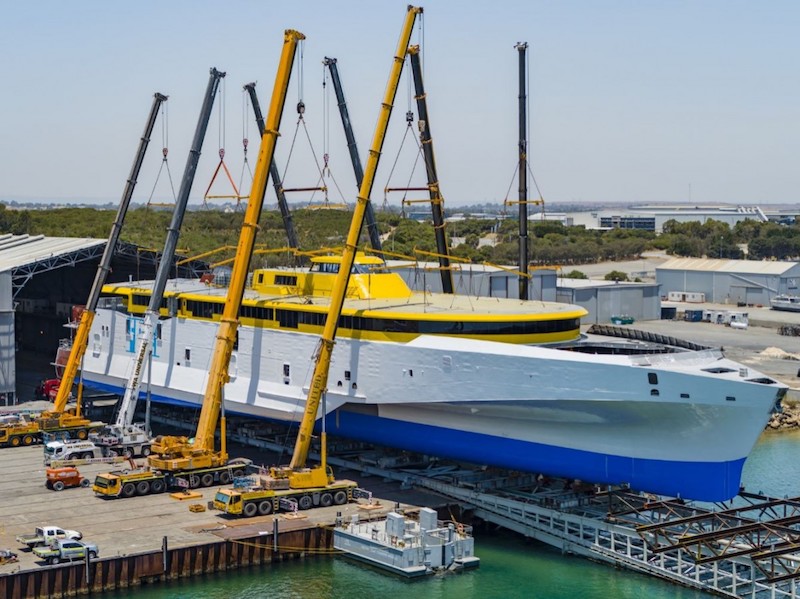 Austal Limited is pleased to announce that Austal Australia has rolled out the hull (No. 394) and attached the superstructure for the first of two 118 metre trimarans under construction for Fred. Olsen Express of the Canary Islands.

‘Bajamar Express’ was rolled out onto the hardstand at Austal Australia’s Henderson shipyard in Western Australia on 14 December, in preparation for final fit out before launch in February 2020.

Austal Chief Executive Officer David Singleton highlighted the vessel’s significance as one of nine trimarans currently under construction by Austal, around the world.
“The Bajamar Express is one of nine trimarans we are currently building for commercial and defence customers throughout the world. We have two of these amazing 118 metre trimarans ferries for Fred. Olsen Express underway – one here in Australia and one in the Philippines, an 83 metre trimaran ferry for JR Kyushu Jet Ferry of Japan under construction here in Australia, plus six Littoral Combat Ships under construction for the U.S. Navy in Mobile, Alabama,” he said. “With so many trimaran vessels under construction, and more to come, Austal’s Australian based design team is clearly at the forefront of trimaran technology development, and we’re very excited to see another iconic vessel taking shape here in the Henderson yard.
“We can’t wait to see the Bajamar Express in the water – she will be a truly impressive sight and along with her sister ship Bañaderos Express, a fantastic addition to the Fred. Olsen Express fleet.”

Austal was awarded the contract for two 118 metre trimarans, worth over A$190 million, in October 2017 and construction of the first vessel commenced in September 2018. With construction on track and fit out scheduled over the New Year, the vessel is on schedule for delivery in the second quarter of CY2020.

Capable of transporting more than 1,100 passengers and 276 cars at speeds up to 38 knots, the new ferries for Fred. Olsen Express feature Austal’s latest, optimised trimaran hull form and will be fitted with Austal’s industry-leading Motion Control technology that delivers a smoother ride and an enhanced on board experience for both customers and crew.