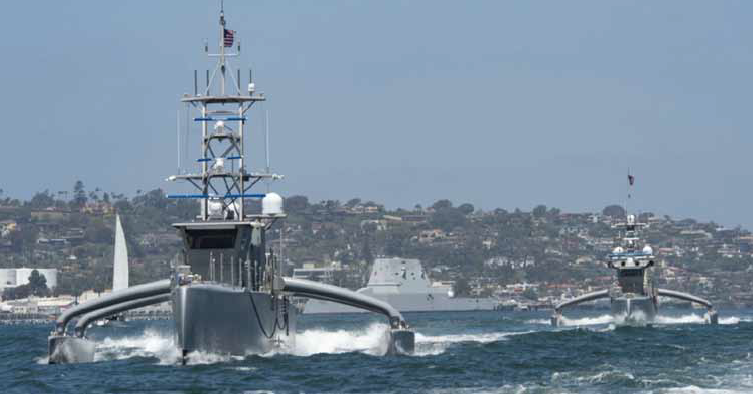 As the Navy moves toward unmanning part of its future fleet via air, surface and underwater drones — plans that have prompted skepticism from some in Congress — U.S. 3rd Fleet hosted the sea service’s first-ever fleet exercise focused on unmanned systems this week on the West Coast. Dubbed “Unmanned Integrated Battle Problem 21,” the exercise will for the first time place the fleet’s burgeoning drone assets alongside manned vessels in different scenarios.

While the Navy provided press releases, admiral interviews and multimedia materials showcasing the event, the sea service was largely mum on what the unmanned vessels will actually be doing all week. Rear Adm. Jim Aiken, who is leading the exercise, did tell reporters Tuesday that one scenario will involve using drones to extend the sight of a warship, which will then shoot a missile at a target from long range. But Aiken declined to discuss specifics on what the other scenarios would entail, saying the details were classified, and that they would involve intelligence, surveillance and reconnaissance, as well as teaming manned and unmanned vehicles in day-to-day fleet operations and battle plans.

The exercise comes about a month after the Navy released its “Unmanned Campaign Plan,” a long-awaited document that was supposed to lay out the sea service’s unmanned future but instead faced criticism for its lack of depth or detail.“I was really disappointed with the lack of substance,” Rep. Elaine Luria, D-Va., said during a hearing before the House Armed Services’ sea power subcommittee last month. “I thought it was full of buzzwords and platitudes but really short on details.”