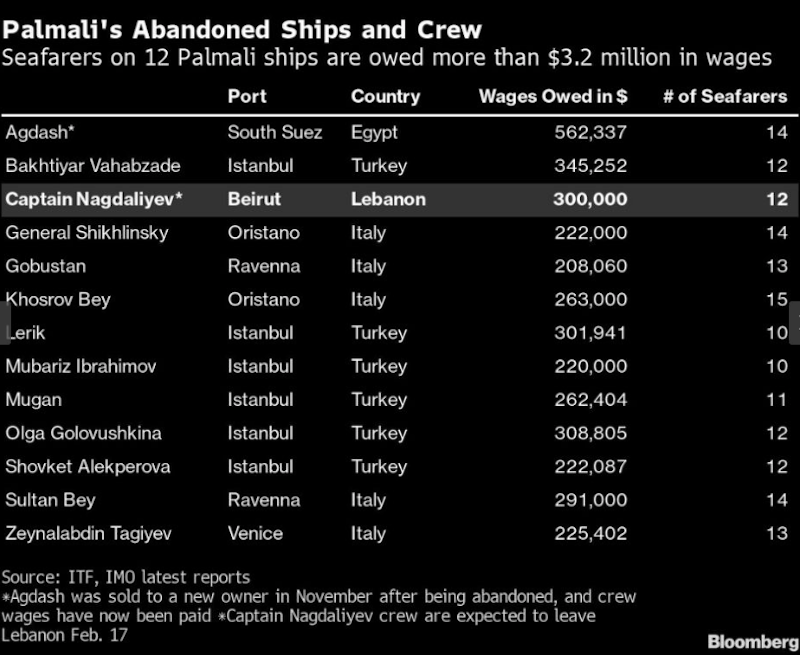 When Turkish police arrested shipping magnate Mübariz Mansimov Gurbanoğlu at his Istanbul home one Sunday last March, his legal woes set off a chain of events that have decimated Palmali Shipping, his once-flourishing maritime empire. Now a dozen of its ships sit abandoned in ports around the Mediterranean with nearly 150 mariners stuck on board, many without adequate food and water.

Workers on at least two Palmali ships have gone on hunger strike to protest the treatment they say they’ve endured. For a crew marooned in Beirut, the dramatic measure appears to have worked. After a nine-day strike, they were put on flights home Wednesday and offered $114,000 to cover some of their lost wages -- less than 40% of what they’re owed. Some hadn’t been paid in 15 months.

“I just want to get home,” said Samig Nabiyev, the 44-year-old captain. He and his shipmates agreed to the terms offered by the so-called protection and indemnity club, a mutual insurance association funded by shipowners that is responsible for workers if companies can’t pay. “The company only thinks about the ship, not the crew--not us humans,” Nabiyev said in a phone interview.

All told, Palmali seafarers on ships stranded in Italy to Turkey are owed more than $3.2 million in wages, according to the International Transport Workers’ Federation, the labor union that represents many ship workers. Their predicament is part of a startling trend that saw cases of abandoned ships more than double from 2019 to 2020, and so far, they are on pace to double again in 2021. Around the world, hundreds of ships, their cargo and crew are marooned, a logistical nightmare and humanitarian crisis worsened by ever-changing pandemic-era port restrictions.

Palmali representatives didn’t respond to Bloomberg emails and calls about the abandoned ships and crew. The company has also declined to engage with the ITF, the union said. The organization has provided humanitarian aid to the stranded seafarers and has been trying to negotiate their release with the company, the port authorities and officials in Malta, where the vessels are registered.

“Is this the new trend -- that seafarers have to go on strike to get home?” said Mohamed Arrachedi, the ITF network coordinator in charge of Arab countries and Iran. “They’ve run out of food and water three times and no country or authority seems to care.”

From jail, Gurbanoğlu acknowledged the seafarers’ hardships in a Jan. 26 letter he sent to some of the ships. “You haven’t been receiving your wages, and you have been experiencing food and fuel shortages. As I hear all of this, I feel terrible,” he wrote. “I beg you one thing, please take care of the ships and please be patient.”

Gurbanoğlu, whose empire at one point included a yacht resort catering to oligarchs and sheiks, is accused of supporting an exiled cleric who allegedly attempted a coup to overthrow President Recep Tayyip Erdogan. Gurbanoğlu has denied the charges of terrorism. If convicted, he faces a 15-year prison term.

At trial on Jan. 13, Gurbanoğlu told the court that his companies are bankrupt, leaving ships “rotting” in port and thousands of employees unpaid, according to the Anadolu Agency, Turkey’s state-run news agency. Court proceedings will continue in March.

For the mariners stranded on Palmali ships, neither Gurbanoğlu’s letter nor his plight inspired much sympathy. Nabiyev said he and his crew didn’t even bother reading it. “Palmali and Mansimov have only told us lies,” he said. “They left us here in Lebanon and have not helped us at all.”

Nabiyev and a crew of 12 sailed the Captain Nagdaliyev vessel into Beirut in May. A dispute over an outstanding bill with the usual refueling company left the ship stranded in port, and Palmali stopped communicating with the seafarers on board, Nabiyev said.

The Aug. 4 Beirut port explosion, triggered by cargo left in port by an abandoned ship, made Lebanese officials even more cautious in dealing with Nabiyev and his crew, according to the ITF. By November, the authorities had allowed eight members of the crew to go home but insisted that Nabiyev and three more stay with the ship.

Port and ministry officials in Lebanon and Turkey didn’t responded to calls and emails seeking comment.

Ships are often registered in countries far from companies’ official headquarters, making oversight difficult. That leaves port officials to oversee the safety of ships and seafarers, who are protected by international maritime law.

“We have developed policies that are ill-suited toward protecting seafarers in favor of the general flow of commerce,” Ralby said. “When things go wrong, seafarers pay the price.”
Protection and indemnity clubs can arrange repatriation and as much as four months of lost wages for abandoned seafarers. That’s often a small fraction of what they’re owed, and while workers can try to recoup in court, many fear that once they leave their vessel, they lose the last bit of leverage they have to collect.

Some of the mariners on Palmali ships have been repatriated by P&I clubs, and negotiations are ongoing. Others are staying put and hoping for a rescue. The 14 seafarers aboard the Agdash, which was abandoned in an Egyptian port, got more than $562,000 in lost wages when their ship was sold to a new owner in November, according to the ITF.

One of the few seafarers who would speak on record, Nabiyev said his crew’s abandonment amounts to false imprisonment and a violation of their human rights. For now, he’s looking forward to arriving at home in Azerbaijan’s capital city of Baku. His mother is fighting cancer and bills have mounted. “I just want to see and hold my daughters,” he said. “Then I need to find work on another ship.”

Palmali hired two Lebanese seafarers to stay on the ship in Beirut. Union inspectors overseeing the rest of the abandoned ships say they have not heard from the company.