MOL: Wakashio grounding caused by unsafe behaviors due to overconfidence 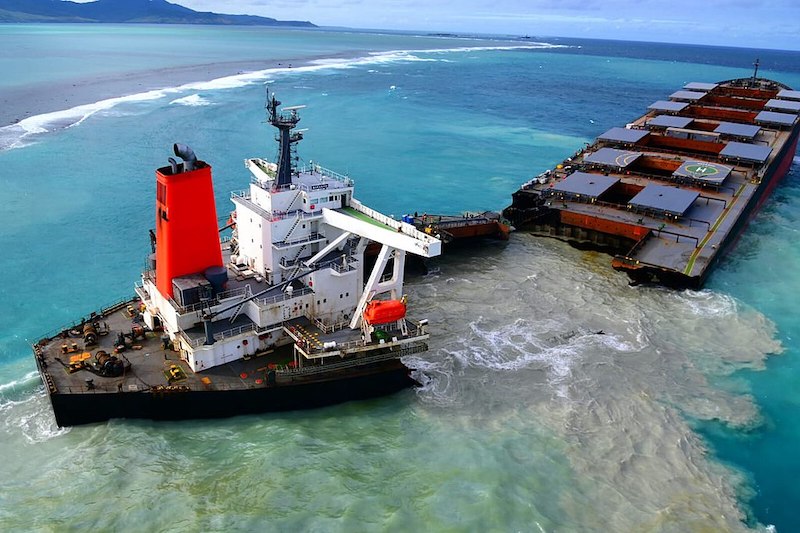 The probable cause of the devastating grounding and oil spill from Wakashio off Mauritius are unsafe behaviors due to overconfidence that stems from complacency, Japanese shipowner MOL said.

The bulk carrier Wakashio, chartered by MOL from a subsidiary of Nagashiki Shipping Co., ran aground off the island of Mauritius on July 25 and leaked bunker oil on August 6.

Around 1,000 tonnes of oil are estimated to have leaked from the wreck, in what is considered the worst oil spill in the history of Mauritius.

Based on the information the shipowner obtained from the crew members, two days before the grounding of Wakashio, the vessel changed her passage plan-the distance from the coast when sailing off the island of Mauritius-from 22 nautical miles to 5 nautical miles.

Similar findings were released following a preliminary investigation by the Panama Maritime Authority which said that the bulker diverted from its navigation route approaching closer to the coast of the island as the crew was trying to pick up an Internet signal.

As disclosed, the captain of the ill-fated bulker ordered the change of course and instructed the ship to approach 5 miles away from the coast. The Panama Maritime Authority said that the modification could also be linked to a birthday celebration of one of the crew members.

In MOL’s view, such behavior on a large vessel reflects a lack of safety awareness.
“Another reason behind the cause is that the crewmembers lacked awareness of the guidelines on performing navigation in a safe manner and their efforts to conform were insufficient, because they did not prepare an appropriate passage plan that would have ensured appropriate performance, did not own and use the correct nautical map, and neglected visual and radar watchkeeping,” the company said.

MOL plans to invest the equivalent of about JPY 500 million ($4.8 million) in measures to prevent the reoccurrence of probable causes of the incident. These should include addressing the lack of safety awareness and lack of awareness of regulations on safe navigation and insufficient performance as well as enhancing ship operation quality.
Wakashio’s bow was sent out to its final resting place on August 24 following a scuttling operation that saw the ship’s front sunk in Mauritian waters.

Chinese rescue and salvage company Lianyungang Dali Underwater Engineering has won a contract to remove the stern section of the Wakashio bulker from a reef off Mauritius’ coast.

The Master and Chief Officer of the ill-fated vessel have been arrested and are facing criminal charges over the environmental disaster.

The International Transport Workers’ Federation (ITF) insists that the investigation into the incident needs to take place before the crew gets blamed for what happened. According to the union, there have been reports that most of the crew on the Wakashio were kept on board beyond their normal contractual terms due to COVID-19 impact on travel.