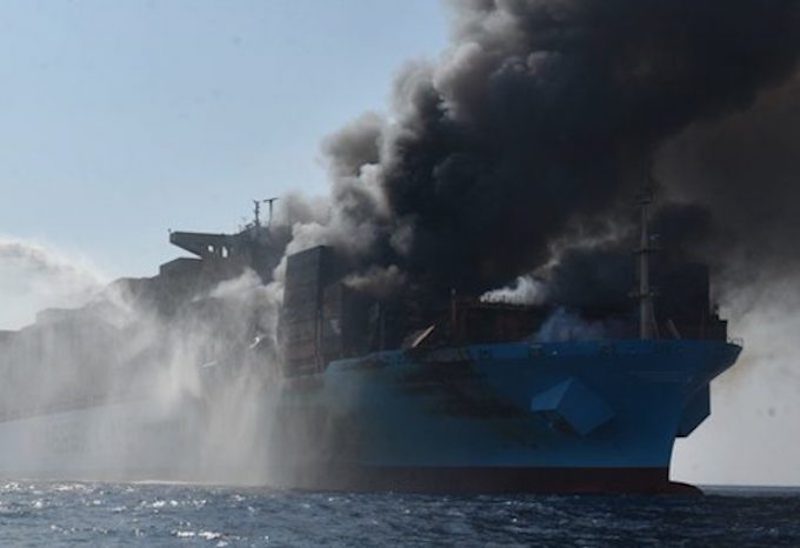 Issues with misdeclaration of cargo, the increasing size of containerships, and a lack of resources continue to be the main themes of the industry when it comes to attempting to find a way to reduce the number of fires on containerships, a panel at the first day of Marine Insurance London said yesterday.

Major fires on container ships are among the worst hazards for shipping and open the door for huge claims. We’ll explore how to reduce losses. Shelley Chapelski, Shipping & Maritime, Law Partner at Norton Rose Fulbright LLP, with Simon Hodgkinson Global Head of Loss Prevention at West Of England P&I Club, Patrick Hudson, Practice Leader, Marine at California-based Envista Forensics, plus Ian Lennard, President of National Cargo Bureau and James Douglas, CEO Exis Technologies, had no difficulty identifying where the problems lay when it came to the causes of severe fires on container ships, but practical solutions were hard to find.

Lennard recounted NCB’s recent inspection initiative (IMN, July 9th 2020) which found that many containers were non-compliant and that a worrying minority had misdeclared cargoes. In 2.5% of cases the misdeclaration served to create a danger for the crew. Extrapolated out this came to 135,000 containers a year. NCB issued a white paper – A comprehensive holistic approach to enhance safety and address the carriage of undeclared, misdeclared and other non-compliant dangerous goods – with 12 lengthy recommendations that it said, if followed, would be effective in reversing the current trend of increasing containership fires. However, the key phrase was “if followed”.

Patrick Hudson of Envista Forensics gave a somewhat downbeat assessment of the current situation, noting that one of the biggest problems was the ever-increasing size of containerships, a trend that showed no sign of stopping. “They are 400 metres long and 60 metres wide, with 24,000 teus, all run by 23 crew. “It’s very hard to fight a fire if you can’t get to it”, he said, noting also that “if you don’t know that you have a fire, you can’t fight it”. Dr Hudson also said that smoke detectors alone only served to detect a fire when the smoke had escaped from a sealed container, so by that time you would already have a serious fire.

Heat sensors were put forward as a potential solution here. When the topic of cost and “who will pay for it?” was raised, Lennard pointed out that, while safety had a cost, a lack of safety also had a cost. Simon Hodgkinson of West of England Club noted that the accommodation was often in the centre of the ship, but this area was in itself completely surrounded by containers. If you had a fire there, then the crew’s safety was compromised. He also said that, although they were trained, the seafarers were not professional firefighters.

Hodgkinson raised a number of points that made the current practical situation very difficult. “Equipment is an issue is an issue. It is improving and there is great technology out, but with only smoke detectors covering the general holds at the moment, by the time you actually know that you’ve got a problem, the problem is already quite big”. He noted that the SOLAS requirement at the moment said that you need to carry a portable monitor. “I’m not a small guy, but these monitors are heavy”, said Hodgkinson. With ships being so big and the need to get it to the right location, this was another problem. Also, the portable firelances required actions which in practice ranged from difficult to impossible. “Even if the container is at deck level, a person in full fire-fighting equipment has to get to the top of the (hot) container to punch a hole in it. If the container is significantly above deck level in a stack, the requirement is virtually impossible. Finally, because of misdeclaration, the firefighting crew cannot trust the smoke, which could be toxic. And, with the ship moving, the direction of the smoke could change. Hodgkinson said that one thing the P&I Clubs might do is to extend education further down the chain, beyond the freight forwarders to the smaller shipping agents. But the contributors all accepted that most implementations to improve safety would come with a cost, and that this meant they would have to be required by regulations, rather than just suggested.