Not a ‘Pacific’ ocean at all 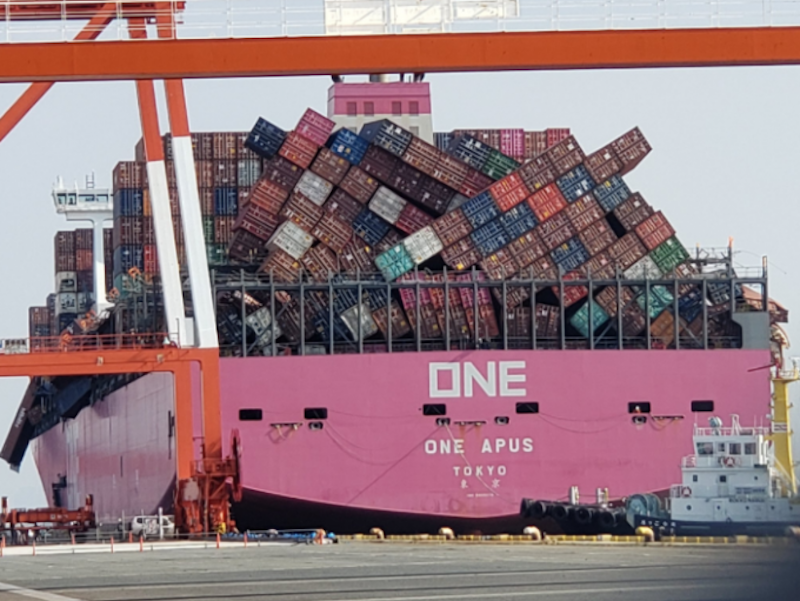 Winter in the North Pacific is not a place for the faint-hearted, but the scene of devastation aboard the ONE Apus after the loss or damage of a substantial portion of her deck load is the perfect illustration of what the sea can do to even the biggest ships.

According to owners, Chidori Ship Holding, and managers NYK Shipmanagement, the vessel lost 1,816 containers, with a full survey now set to take place now the ONE APUS has safely arrived in the port of Kobe, which it diverted to after the incident.

These occurrences seem to be taking place too often, despite the rapid increase in ship sizes and suggestions that weather forecasts have got so much better on these long ocean passages. Climate change enthusiasts have attempted to make the obvious connections, with the incidence of extreme waves allegedly having increased in recent years. A rather sinister tendency has been to blame the master of ships for what in a different age would have been in the protest note as “heavy weather damage”. It has been suggested that had the ship been handled rather differently, perhaps altering the course and/or speed, the outcome would have been different. It is an easy and thoroughly unfair judgement to make, from the safety of dry land.Others who have seen what the sea can do have made the point that if operators must insist on piling boxes to such incredible heights in their deck stows, regardless of the season and the anticipated weather, then one should not be too surprised at damage and massive losses.

There may be various devices available that claim to optimise ship motion, but expecting them to somehow flatten vast Pacific swells or prescribing course changes in time to avert catastrophe, is perhaps over-egging their abilities. A deep low is a very dynamic situation and it is asking a great deal of a master to be able to minimise damage in terrible weather, during a dark night when it is impossible to see what is likely to hit the ship until it happens.

Doubtless, there will some sort of post-mortem, where the stowage and lashing plans are scrutinised and what remains of the lashing equipment will be closely examined. A sensible strategy might be to weigh the surviving boxes, to compare actual with manifested weight. But this wasn’t a case of a single stack giving way – the best part of the entire midship stow seems to have lurched to starboard like collapsing dominoes, as the ship fell on her side.

One point that might be explored is the fact that the container guides above the main deck extended no more than three boxes high, necessitating the six or seven boxes above these having to be manually lashed. It is notable that on some ships, such as the HMM giants and the big new OOCL tonnage, the deck stow is “racked” to a height of six boxes, which one might think provides a great deal of additional solidity to the stack, and saves a lot of costly lashing. The penalty with this arrangement is that the stevedores will claim that it markedly slows down the cargo handling as each box must be lifted high over the guides before it can be positioned. The new generation of port cranes is said to cope with this problem better than their predecessors. It is significant that Atlantic Container Line, which never trades anywhere other than across the wild western ocean, has always racked their entire deck load to full height and despite the weather, has an enviable record of cargo security.

But it is always easier to blame the master than to get terribly analytical about deck cargo loss and recent instances where cargo has ended up on somebody’s beach have seen shipmasters dragged into court by the wronged coastal state. A more cerebral counsel might be to ask whether it is sensible to stack boxes so high, but big money is at stake, and nobody is going to answer that question. Pile ‘em high, and take the chance in a percentage game.