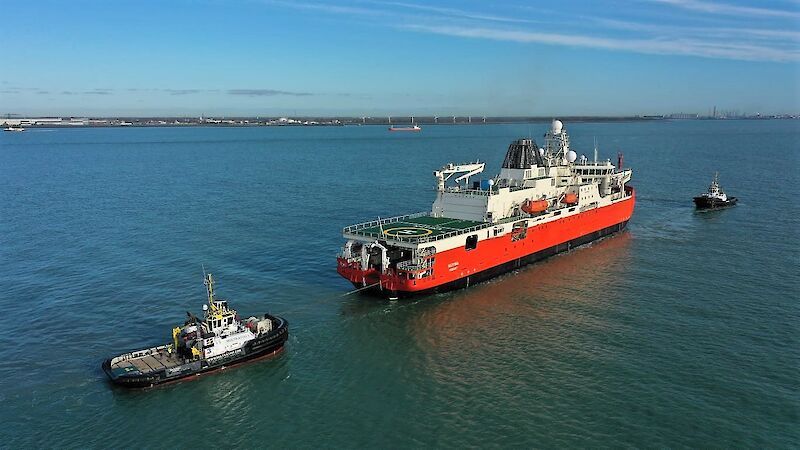 Australia’s newly completed icebreaker, RSV Nuyina, has left the Netherlands port of Vlissingen to commence trials in the North Sea.

This marks the start of a month-long Sea Trials Phase and an important milestone for all involved in the icebreaker project across the Australian Antarctic Division, ship managers Serco and ship builders Damen.

Sea trials will be followed by additional weeks of deepwater trials. Testing of the ship’s speed, noise, propulsion systems, steering, advanced electrical systems, and science equipment will take place as the vessel prepares for final sea ice trials in the Arctic early next year.

One of the most advanced vessels of its kind in the world, RSV Nuyina will form the centrepiece of the Australian Government’s Antarctic Strategy and 20 Year Action Plan.

RSV Nuyina will provide a world-class scientific platform for Antarctic researchers, carrying cutting-edge equipment to study the depths of the Southern Ocean, sea ice and the upper atmosphere.

With capacity to carry 117 expeditioners, 1200 tonnes of cargo and 1.9 million litres of fuel, the icebreaker will be the main lifeline to Australia’s Antarctic and sub-Antarctic research stations for decades to come.

Nuyina (meaning ‘southern lights’ in palawa kani, the language of Tasmanian Aborigines, pronounced noy-yee-nah) is expected to arrive in its home port of Hobart in mid-2021 to commence Antarctic operations in next year’s summer season.