What is a Stowaway? 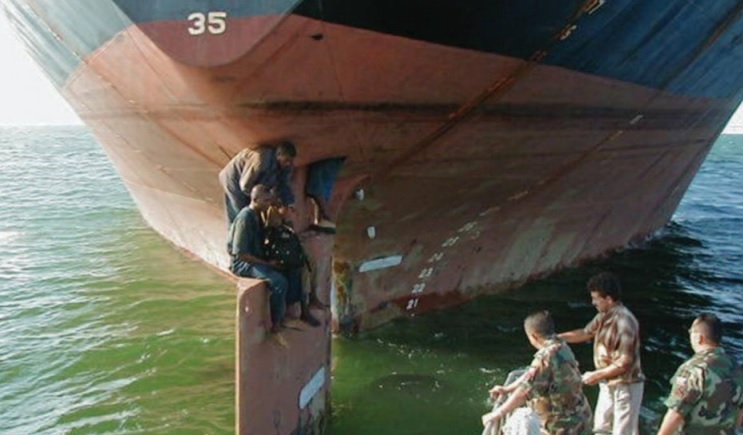 The Convention on Facilitation of International Maritime Traffic, 1965, as amended, (The FAL Convention), defines a stowaway as "A person who is secreted on a ship, or in cargo which is subsequently loaded on the ship, without the consent of the shipowner or the Master or any other responsible person and who is detected on board the ship after it has departed from a port, or in the cargo while unloading it in the port of arrival, and is reported as a stowaway by the master to the appropriate authorities"

A stowaway is a person who hides on a vessel or other mode of transport to gain transit somewhere without paying. Often they are people hoping to make a better life for themselves away from their country of origin.

Stowaways are an ever-present problem for the shipping industry, in particular to those trading off the coast of West Africa, in Central America, Colombia, Venezuela and in the Dominican Republic.

In addition to vessels’ trade patterns, the problem of stowaways is closely linked to vessel, cargo type, and the level of security training and awareness of the crew.

Stowaway cases were increasing steadily prior to 2004. Following the introduction of the International Ship and Port Facility Security (ISPS) Code in 2004 there has been a drop in the number of reported stowaway cases. The trend, however, seems to be that the numbers are again on the increase.

The majority of stowaways are found on board bulk, container and general cargo vessels. Car carriers are also over-represented in stowaway data compared to other vessel types.

The costs involved in looking after and repatriating stowaways can be substantial. The repatriation of stowaways is difficult and generally involves moving reluctant people across several continents.

In 2002 the average cost to ship insurers of each stowaway case was approximately USD 7,000. By 2008 this figure had increased significantly, to just over USD 18,000 (excluding the applicable deductibles paid by the Member). If more than one stowaway gains access to the vessel, the costs have been known to escalate to in excess of USD 100,000, because repatriation is usually only permitted with two security guards escorting each stowaway.

In an ideal world shipowners and Masters identify the presence of stowaways before a ship leaves port or prevents them from boarding the vessel in the first place. However, most stowaways are only discovered once a vessel has sailed and this then triggers a catalogue of time-consuming negotiations with clubs, agents and authorities. The cost alone from disruptions to the ship’s schedule can be considerable.

There are a number of preventive measures the Master and crew can take before the ship enters port, during the stay in port and after departure.

One of the most important first steps a Master can take is to conduct a thorough risk and port assessment to prevent stowaways from boarding.

Stowaway’s want to remain undetected so they’ll chose the places which are rarely inspected by the ship’s crew. They also come equipped with enough food and water to last them for the duration of the transit.

They can also access vessels by:
• Bribes. Although ports are restricted areas under the ISPS code (Meredyth write copy for this to link to) stowaways can pay bribes to port workers or crew to gain access to the jetty.
• False identification. Stowaways can access the ship as stevedores or using faked supplier documentation before hiding in the ship.
• Containers. Stowaways can get inside shipping containers before they are loaded and create false walls within them to evade detection, these can stretch from side to side and from top to bottom. The false wall will be painted in colours that match the rear wall of the container.
• Rudder. Stowaways can jump into the water before climbing up the stern part or rudder of the ship.

There are certain geographical areas which generally are high risk. These include all of Africa, parts of Central America, Venezuela, Colombia and the Dominican Republic. These areas will probably continue to be high-risk for the near future. Masters and crew should be particularly vigilant and focus on measures to prevent stowaways when calling at ports in these areas.

The Master should always be aware of regional hot spots for stowaways and put in place measures to prevent stowaways gaining access to the ship when operating in high risk areas.

Their reasons for stowing away may vary, e.g. political, economic, criminal or adventure seeking and it is therefore difficult to accurately predict which ports are considered particularly high risk at any given time.