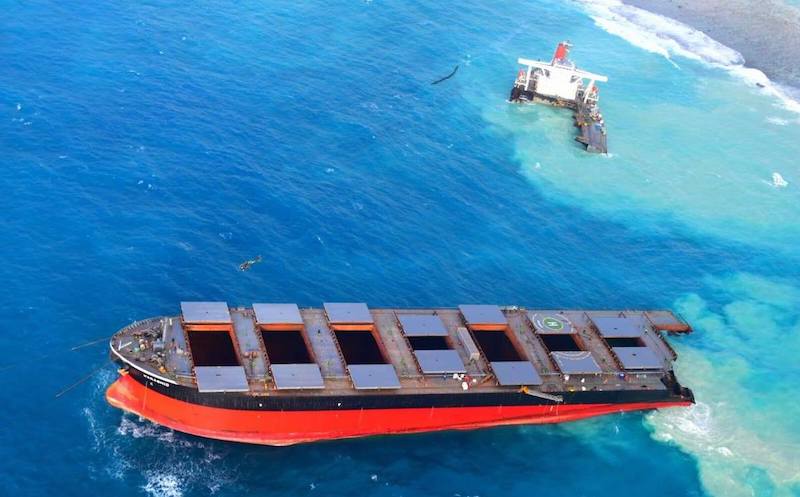 Wakashio, the giant Capesize bulker which ran aground on a reef off Mauritius and subsequently split in two, causing a major fuel spill, diverted from its navigation route approaching closer to the coast of the island as the crew was trying to pick up an Internet signal.

These are the preliminary findings of an investigation into the incident by the Panama Maritime Authority, which has dispatched a delegation of experts to Mauritius. The delegation is currently gathering information through face-to-face interviews with members of the ship’s crew.

The Japanese bulker Wakashio went aground off Mauritius on July 25. The bunker oil from the vessel leaked out on August 6, and the vessel broke apart on August 15.

The ship deviated from its approved navigation plan at the time of sailing from Singapore on the route approved by the captain and his deck officers, which would have taken them to their destination in a safe manner.

As disclosed, the captain of the ill-fated bulker ordered the change of course and instructed the ship to approach 5 miles away from the coast. Apparently, the crew was trying to pick up a telephone or an Internet signal so they could get in touch with their families. The Panama Maritime Authority said that the modification could also be linked to a birthday celebration of one of the crew members.

The findings further show that the captain, the chief engineer and the first officer were on the navigation bridge when the ‘improper approach’ was taking place and were in a position to correct course and avoid the grounding after Mauritian authorities alerted them of the danger. However, they failed to do so.

Previous accounts from the Mauritian authorities indicate that they tried to get in contact with Wakashio prior to the grounding as the ship was sailing too close to the coast and were warning the vessel to turn back, but their calls were unanswered.

Furthermore, AMP reports that the crew seems to have used an inappropriate chart onboard with the worng scale as well.

“The lack of supervision and monitoring of the navigation equipment, the distraction generated by the officer of watch, who lost the course of navigation completely, and the excess of confidence during the watch, could be some of the reasons that caused the ship running aground in the beaches of Mauritius,” the AMP pointed out. “With an appropriate assessment safeguard and with good seamanship practices, that should have generated an analysis which would have allowed to carry out the pertinent actions to correct this situation.”

The maritime authority is resuming the investigation. Its delegation is expected to interview the captain, the first officer, and get access to the voyage data recorder (VDR) and essential documents for the investigation, which are in the custody of the Police of the Republic of Mauritius.

The Master and Chief Officer of the ill-fated vessel have been arrested and are facing criminal charges over the environmental disaster. Sunil Kumar Nandeshwar, the captain of the Capesize bulker, appeared in court in Mauritius capital last week, and his lawyers have asked for all charged to be dropped against him, according to the reports from French media.

The captain is facing up to 60 years of imprisonment on the grounds of unlawful “interference with the operation of a property of a ship likely to endanger its safe navigation” under articles 5(1) (b) (2) et (9) of Mauritius’s Piracy and Maritime Violence Act.

The International Transport Workers’ Federation (ITF) insists that the investigation into the incident needs to take place before the crew gets blamed for what happened.

According to the union, there have been reports that most of the crew on the Wakashio were kept on board beyond their normal contractual terms due to COVID-19 impact on travel. Industry bodies have been warning about the potential consequences of the contract extensions on seafarers’ physical and mental health, especially having in mind their inability to reach out to their loved ones due to poor connectivity on board and no access to shore centers.

“The tragedy of the Wakashio, its crew and the Mauritian people and environment is a reminder to us all of what can happen when tired and fatigued humans are expected to keep working indefinitely. It is not sustainable nor acceptable to have seafarers continue working to the detriment of their health and mental wellbeing: mistakes will happen. Accidents like this will happen!” Chair of the ITF’s Seafarers’ Section, David Heindel, said in August.

The Maritime Union of India (MUI) has also requested for a fair trial to the captain of the bulker, who is an Indian national. As disclosed, the captain has had an incident-free career in the merchant navy for 40 years and 25 years as a captain. “MUI’s communication has requested these bodies to investigate the arrest of Capt Sunil Nandeshwar in Mauritius and conduct his judicial trial in the local Court abiding the guidelines laid by ‘International Maritime Organisation’ and without bowing to any political, governmental or corporate pressure. He is currently in judicial custody in Mauritius,” the statement reads.

Meanwhile, cleanup efforts and assessment of the extent of the fuel spill continue. It is estimated that around 1,000 tonnes of oil have leaked from the wreck, in what is considered the worst oil spill in the history of Mauritius.

Japanese shipping major MOL, as the party using the vessel under a charter contract with the shipowner, said it was committed to contributing to a swift recovery from the oil spill and restoration of the environment and community through the allocation of personnel and provision of supplies and equipment for the collection of the leaked oil.

Japan has offered support of an ‘unprecedented scale’ to Mauritius in the clean-up operation and other support measures, Reuters reports citing a phone call between Japanese Foreign Minister Toshimitsu Motegi and Mauritius Prime Minister Pravind Jugnauth.

These are likely to include helping introduce a maritime navigation safety system in Mauritius, providing fishing gear to small fishing operators, and promoting Mauritius’s trade and tourism.