The bow section of the stricken bulk carrier Wakashio has been scuttled Monday after the Japanese-owned bulk carrier ran aground, spilled oil and broke apart atop a coral reef off Mauritius.

Scuttling efforts commenced last week but progressed slowly due to rough sea conditions, authorities said. The front section of the ship is no longer visible as of 3:30 p.m. local time on Monday after salvors cut holes into the bulkheads of several cargo hatches to accelerate the sinking process, Mauritius' National Crisis Committee said.

The 300-meter, Panamanian-flagged ore carrier struck a coral reef off the Indian Ocean island on July 25 and began spilling oil from a crack in its hull on August 6, leading the government to declare a state of environmental emergency. Salvage crews managed to remove most of the ship's remaining oil before it broke apart on August 15, but the spill had already spread over a vast area of endangered corals, affecting fish and other marine life.

The bow section was towed out to be sunk in deeper waters further from shore to locals' dismay, while salvors worked to remove diesel oil and other pollutants such as wood, panels and any floating debris from the stern section, which remains aground on the reef. 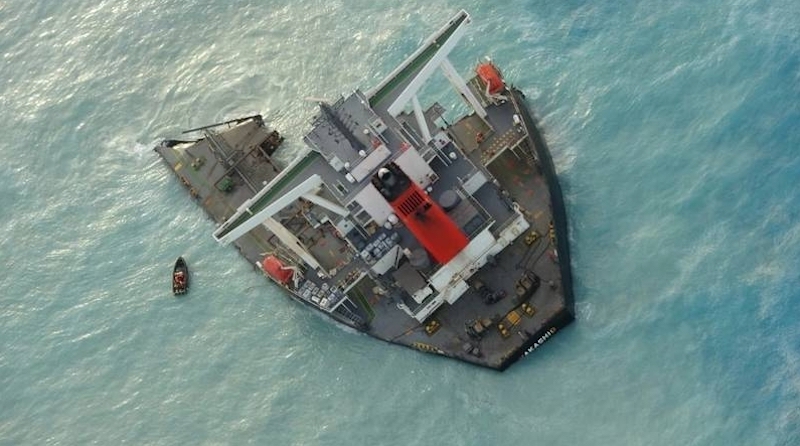 Meanwhile, crews are collecting and redeploying booms while skimming operations and shoreline cleaning efforts continue. So far 1,122 tons of liquid waste and 792 tons of contaminated solid waste have been recovered, officials said. Teams from France, Japan and India have been sent to assist in the cleanup.

Scientists say it's too early to gauge the full impact of the grounding and spill but that the damage could impact Mauritius and its tourism-dependent economy for decades.

The cause of the incident is under investigation. Authorities are working to determine why the ship, owned by Nagashiki Shipping and chartered by Mitsui OSK Lines, diverted more than 55 nautical miles from a regular shipping lane when it went aground.

Nagashiki Shipping apologized for the accident and said it will support the crew and their families while awaiting future judicial decisions.