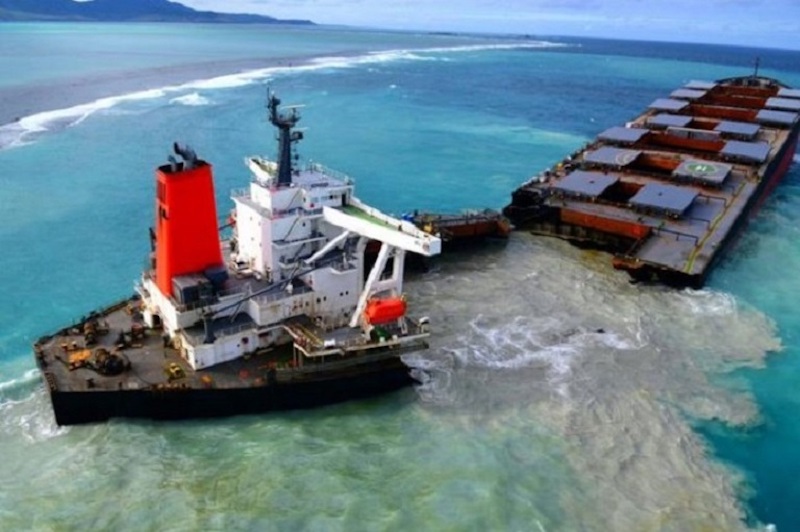 MV Wakashio, the bulk carrier that caused an oil spill off the southeast coast of Mauritius when it ran aground a reef close to 3 weeks ago, has now split into two parts. As reported on August 15th, 2020, the forward section of the ship detached around 4:30 pm causing irreparable damage.

Wakshio’s owner, Nagashiki Shipping said in an official statement on Aug 16, 2020: Nagashiki Shipping Co., Ltd. the owner and manager of the bulk carrier, M/V Wakashio, report the following update in relation to the grounding of the vessel off the island of Mauritius on July 25th 2020 and the resulting breach of a bunker tank on August 6th 2020. It was confirmed on August 15 that the vessel has broken into two sections. …At approximately 14:00 local time on August 15th, a crack in the cargo hold No. 8 to the stern side progressed. This caused the vessel to break. A towage plan will be implemented to tow the forward part of the vessel.

Salvage operations are now underway as towing plan is being put into implementation.

Following the oil spill caused due to a crack in the vessel, the government and experts got to work immediately and siphoned almost 3000 tonnes of oil to avoid a major catastrophe. What now remains of the ship is its superstructure, engine room and empty fuel tanks, none of which pose a huge threat to the country’s marine pollution.
Coast guard vessels are employed at the area while booms have been deployed to allow for residual oil absorption after the pumping operations.

The incident of the ship running aground a sensitive region in Mauritius’ pristine waters and later causing an oil spill that threatened its biodiversity caused a storm triggering an environmental emergency. Salvage teams, experts from countries as well as locals pitched in to help by building booms and assessing the damage.

Shinjiro Koizumi, the Environmental Minister of Japan has regarded the disaster as a “significant crisis that could result in the loss of biodiversity”, announcing that he will be sending a group of experts and ministry officials to swiftly assess measures.

Prime Minister Pravind Jugnauth has asked the owner of the Japenese vessel to compensate for “all losses and damages”. Nagashiki Shipping remains apologetic about the event and has pledged to respond to requests regarding the same.

Sensitive regions close to the Pointe d’Esny like the Blue Bay Marine Park and Ile aux Aigrettes are now being given attention to save its species and watch out for pollution.

The removal of the ship is estimated to take months. Meanwhile, the current weather conditions in the island country are said to get worse over the days as waves might rise to 15 feet. Environmentalists remain concerned about the damage caused by the oil spill that could bring down Mauritius’ economy, food security and a plethora of flora and fauna.

Birthday party and quest for wifi revealed in lead up to Wakashio grounding
The 58-year-old captain of the ill-fated newcastlemax Wakashio could face negligence charges after it emerged the crew were celebrating a crewmember’s birthday and had headed nearer towards the Mauritius coastline to get a wifi signal just prior to the bulk carrier’s grounding on a reef off the island’s south coast.

The bombshell revelations – first reported by local newspaper L’Express – come from investigators who have interviewed the crew of the Japanese-owned, Panamanian-flagged ship. The Wakashio grounded on a reef near UNESCO protected sites on the evening of July 25. Local authorities had been trying in vain to contact the ship ahead of the accident to warn it was on the wrong course. It transpires the crew were celebrating a birthday hence missing the initial urgent calls.

The wrecked ship, on the verge of breaking up, has since spilled around 1,000 tonnes of bunker fuel into the pristine Mauritian waters, creating the republic’s greatest ecological disaster.

The Panama Maritime Authority had earlier suggested the ship ran into difficulty because of bad weather, although data providers have shown there was no inclement weather around southern Mauritius at the time of the accident.