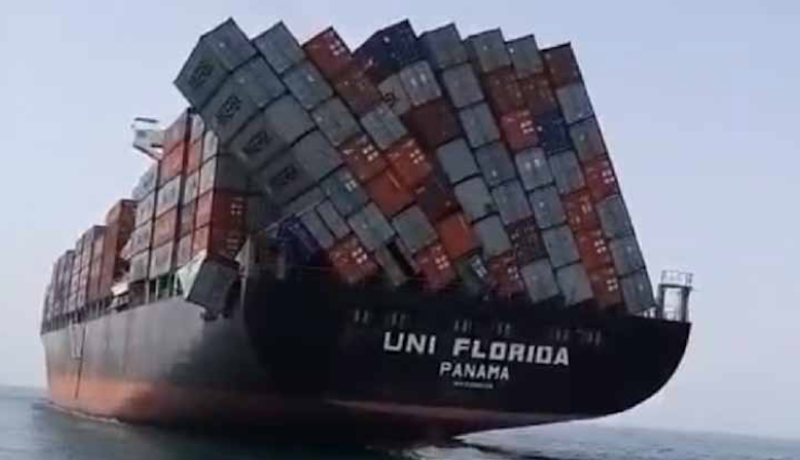 Container ship UNI FLORIDA was involved in yet another incident of containers toppling off the stern of the vessel as it was on its voyage from Saudi Arabia, arriving at Jebel Ali on the 27th of July, 2020.

Images and videos shot by local observers have surfaced showing the container damage on the ship, as stacked containers leaned dangerously on its side, while some may have fallen into the sea. The last incident similar to this had occurred in 2007 when the ship sailed under her maiden name: ITAL FLORIDA.

The 3500 TEU container ship is currently owned by the Uni-Asia Group of Hong Kong. UNI FLORIDA is now moored at the Dubai port, Jabel Ali. The incidents come ill-timed right after the World Shipping Council (WSC) reported that the situation of cases falling off the board had seen a significant decline and is now a small percentage of the total containers transported. Concluding that the loss of containers mostly takes place during major incidents at sea; a number now reduced to around 779 between 2017-2019.

The WCS also went ahead to say that incident reporting must be improved in order to arrive at cases that are blindsided. A protocol was also recommended to develop the safety of operations on container ships.

Instances of container ships falling overboard in 2020, started in last May with the APL ENGLAND losing about 50 containers during severe weather conditions while sailing east of Australia. The ship was detained as it was believed that the lashing arrangements weren’t adequate and was found to be heavily corroded by the inspectors. Australia charged the ship’s captain and is seeking compensation from the owners of the ship. Clean-up operations still continue.

Just about 3 weeks ago, 22 containers were lost overboard while MSC PALAK sailed on high seas in Algoa Bay, South Africa. The port was closed by the Maritime Safety Authority regarding concerns that the drifting containers might enter the shipping channel. The ship departed after a week of detention. MSC supported its clean-up operations.