This could be the end of the line for cruise ships

Stranded cruise ships have become a symbol of the COVID-19 pandemic. Passengers and crew are desperate to get off but the ports to which they’ve headed don’t want them.

It is no exaggeration to suggest this crisis could spell the end of the line for an industry already on the nose for its social, health and environmental problems.

Indeed the same business model at the root of those problems is the cause of its current crisis, in which ship operators have been accused of gross or even criminal negligence.

That model has to do with flags of convenience.

Flags of convenience mean ships operate in waters far from their “home” ports. Most are registered in Caribbean tax havens. Operating outside clear jurisdictions, wages are low and working conditions poor.

That so many ships have become floating coronavirus incubators also indicates poor health and safety protocols. An emergency plan for an infectious outbreak on a ship seems an obvious thing to have. Yet reports suggest improvised responses.

Now, with ports and entire nations ordering cruise ships away, flags of convenience have become an existential threat to crew, and the industry.

Ships ordered away
The industry’s reputational crisis is demonstrated no better than in Australia, where 24 of the nation’s 61 confirmed COVID-19 deaths so far have come from cruise ships.

All 20 cruise ships still in Australian waters were ordered to leave last week, with Australian Border Force commissioner Michael Outram citing concerns the number of cases among crew would be “a big strain on the Australian health system”.

Just one ship, the Ruby Princess. is linked to 18 deaths (and about 700 infections – roughly 10% of Australia’s total cases).

Deaths have also come from the Artenia, Voyager of the Seas, Celebrity Solistice and Ovation of the Seas.

The Ruby Princess was allowed to dock in Sydney on March 19. About 2,700 passengers disembarked without being tested, because New South Wales authorities believed there was low risk.

Police are now investigating possible criminal charges against the operator, Princess Cruises, for misleading authorities about the situation. (The ship has since been allowed to dock at Port Kembla, south of Sydney, with a fifth of more than 1,000 crew quarantined aboard showing virus-like symptoms).

There are also calls for a criminal negligence investigation of the operator of the Artania, in a weeks-long stand-off in Western Australian waters.
Most of the ship’s passengers were allowed to disembark and get charter flights home to Europe. But more than 400 people, mostly crew, remain on board, and the state government fears the number of coronavirus cases would overwhelm local hospitals.

“We’d like you to leave, we don’t want you in our port,” said West Australian premier Mark McGowan.

But where are they, and tens of thousands of crew workers on hundreds of other cruise ships around the world, to go?

Caribbean tax shelters
Consider the Artenia. The ship is owned by British cruise line P&O, chartered to a German company, operates out of Frankfurt and is registered in the Bahamas.

The Ruby Princess operates out of Australia but is registered in Bermuda. Its owner, Princess Cruises, is headquartered in California but also incorporated in Bermuda.

Most cruise ships are registered in a country different to ownership or operation. More than two-thirds (by tonnage) fly the flags of just three nations – the Bahamas, Panama and Bermuda. 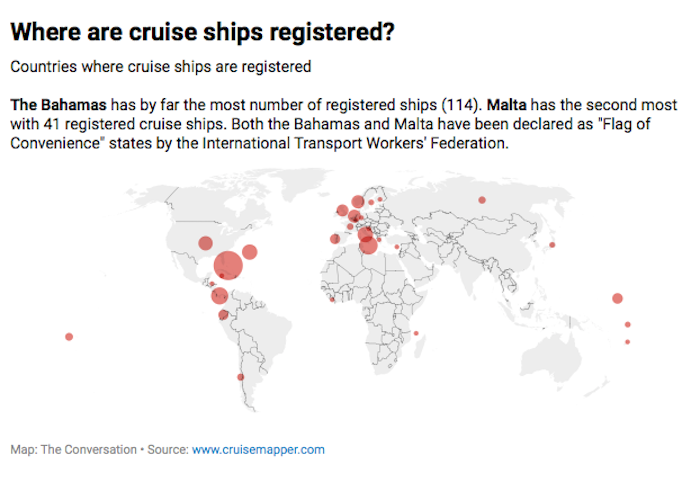 Flags of convenience make the cruise ship industry one of the world’s least regulated, with owners and operators able to skirt more stringent workplace, health, safety and environmental rules.

For crew, particularly those in “lower level” service jobs, pay and conditions are poor. Many accept such conditions to earn money for their families. Hidden from view, even passengers can be oblivious to their conditions.

Incorporations of convenience
Both P&O and Princess Cruises are subsidiaries of the world’s biggest cruise company, Carnival Corporation, whose combined fleet of about 300 ships carries almost half the world’s cruising passengers 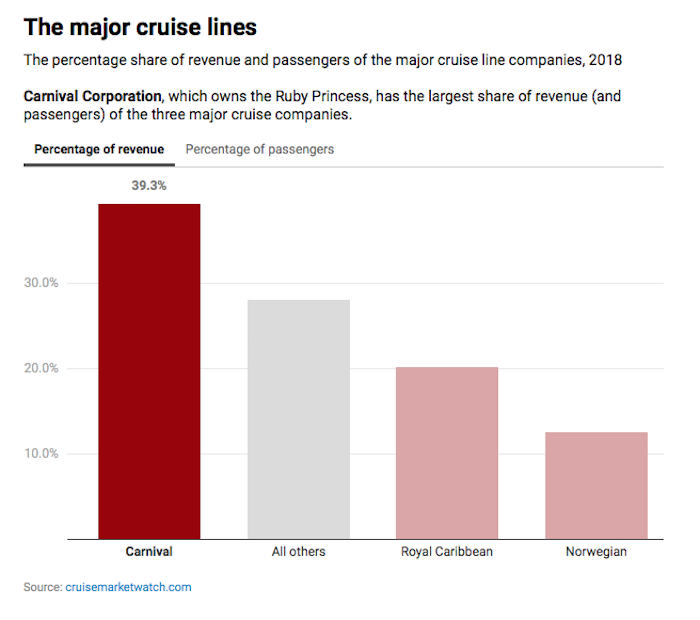 Carnival Corporation is headquartered in Miami, as are the second and third biggest cruise corporations, Royal Caribbean and Norwegian. But Carnival is incorporated in Panama, Norwegian in Bermuda, and Royal Caribbean in Liberia.

Now these “incorporations of convenience” threaten their survival. Their revenue has been cut to zero. The US government is offering no assistance because they’re foreign companies and their employees are spread across the world. Other governments are unlikely to do more.

Industry analysts say the big cruise operators have enough reserves to last six months. After that, if they don’t secure funding, they face going out of business.

Sailing into the sunset
If that happens, many will not mourn the loss.

Long before this crisis, the cruise ship industry was on the nose for its social and environment problems.

It has contributed to overtourism in places like Barcelona, Reykjavik, Dubrovnik and Venice. Its environmental record is appalling. Just last year Carnival paid $US20 million (A$28 million) to settle a US court case over it allowing its ships to dump rubbish in the ocean – something for which it has a previous criminal conviction.

Whatever remains after this crisis will need a complete overhaul.