Austal looks to US Navy and South China Sea for growth 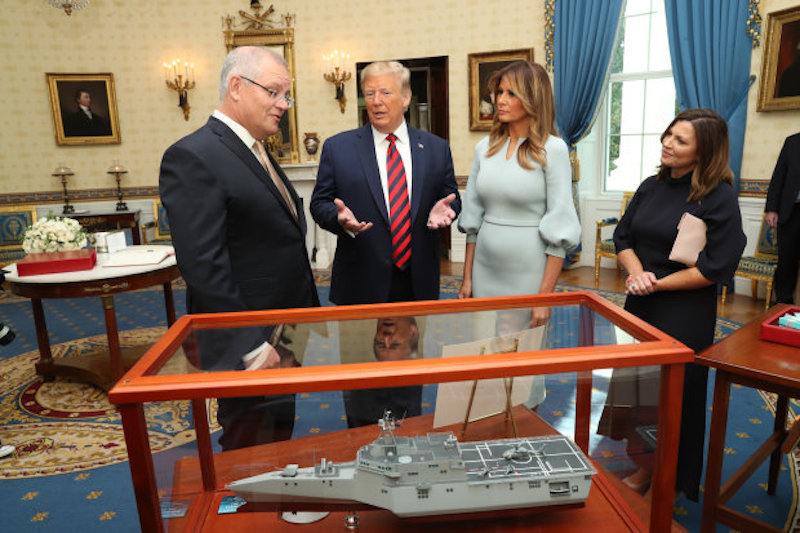 Austal chief executive David Singleton must have been chuffed with US President Donald Trump’s choice of gift for Australian Prime Minister Scott Morrison.

Mr Trump's glass-encased offering was a scale model of USS Canberra, one in a long line of Littoral Combat Ships (LCS) ASX-listed Austal is building for the US Navy.

The gift, presented during Mr Morrison's state visit in September, came with Austal’s sights set on building the US Navy’s new class of guided missile frigates.

Austal is also aiming to make a splash in the troubled South China Sea where alongside a private equity firm chaired by former US vice president Dan Quayle it is bidding for the biggest shipyards in the Philippines.

The shipyards in Subic Bay, which were formerly owned by South Korea’s Hanjin Heavy Industries and Construction, could act as a strategic support base for US vessels and strengthen Austal’s case to build offshore patrol vessels for the Philippines Navy at its existing shipyards in Cebu. Austal has emerged as one of the US Navy’s major suppliers and will have built about 15 per cent of the fleet in vessel number terms by the time it completes orders for the LCS and Expeditionary Fast Transport Ships at its shipyards in Alabama.

Winning the frigate work would provide a massive boost to the company’s already strong position in the US, where it generated 80 per cent of revenue of $1.85 billion in 2018-19, and position it to supply the US Navy with vessels into the 2030s.

The company, which is Australia’s biggest defence exporter as well as a builder of high-tech, high-speed ferries for the private sector, ended 2018-19 with a $4.9 billion order book-out to 2024.

Mr Singleton told the annual general meeting last month that Austal had made its commercial and technical pitch for the frigates with a decision expected between July and September.

Navy shipbuilder backs Trump's stand on intellectual property theft and China
He said the US Navy had indicated the contract could take the form of a 10-ship block buy if all options are exercised.

If it wins the work, Austal expects the required expansion of its shipyards in Mobile, Alabama, to add up to less than $US100 million ($146.2 million) spread over several years and possibly funded through cash flow.

Petra Capital head of industrials Killian Murphy isn’t as worried as some about the consequences for Austal if the frigate bid fails, although he recognises winning the work would put a “decent lick” on the share price. Mr Murphy said LCS orders already encompassed deliveries out to 2024, Austal's shipbuilding margins were improving and its support business was growing fast with the increasing number and age of LCSs already on the water. He said it was clear Austal had earned the trust of the US Navy and operated a highly efficient shipyard which put it in a strong position to get the frigate, or other, work.

The LCS, Austal’s “parent design” for the bigger and badder frigate, is now being deployed more often on rotation in Asia and routinely upgraded with additional missiles.

In its budget request, the navy has asked for $US1.28 billion ($1.9 billion) for the first frigate and estimated the remaining vessels will cost $US900 million apiece.

Mr Murphy said the sugar on top of Austal’s defence business was its ferry building operations taking in shipyards at Henderson south of Perth, Cebu in the Philippines and in Vietnam. He expects Austal to pick up more ferry orders as operators replace ageing vessels caught out by new fuel and emissions regulation.

Sam Teeger, of Citi Research, said Austal remained well placed to drive medium-term earnings growth through its strong order pipeline combined with the prospect for margin expansion in core markets. Citi has put a neutral rating on the stock in the wake of a strong share price run in the past 12 months that saw Austal break into the ASX200. Citi noted that Austal’s order book of $4.9 billion at June 30 had shrunk from $5.2 billion at the end of the first half and that commercial new orders fell from $420 million in 2017-18 to $166 million last year.
However, Citi said Austal was well placed to pursue growth opportunities after beating consensus forecasts with net profit after tax of $61.4 million and with an improved balance sheet.

Mr Singleton told the annual general meeting the Australasian business had gone through a tremendous growth period, but Austal expected a slow down in revenue in the commercial sector as trade nervousness affected customers. He said the company was willing to take bold and decisive steps in the US and Asia, including the Philippines where it has a record $350 million order book and is preparing to launch a 109-metre-long catamaran built for the Fjord Line.

Austal has remained tight-lipped about what is reportedly a formal bid with Cerberus Capital Management for the Subic Bay shipyards, but Mr Singleton in August ruled out any capital raising as part of the potential acquisition.

The company has been working for almost two years on a bid to build six offshore patrol vessels for the Philippines Navy at Cebu. Austal is anticipating an announcement on the work, expected to be worth about $800 million, this financial year.