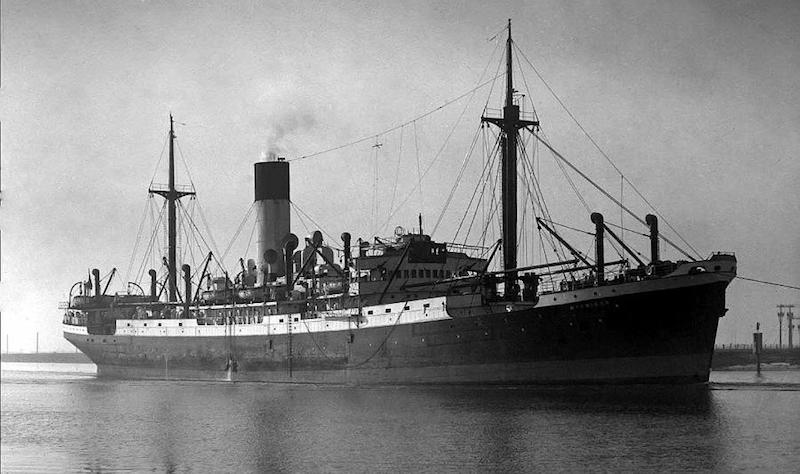 TONY HOPKINS, who has died aged 94, was a merchant seaman who survived being torpedoed in the Second World War and later pioneered shipping links with China.
At about 0230 on September 5 1942, the 18-year-old Hopkins was on his second sea voyage, a midshipman in the Blue Funnel Line’s cargo liner Myrmidon, under Captain Alexander Mann Caird, just short of the Equator, when the German U-506 fired a salvo of torpedoes, one of which struck Myrmidon portside forward. 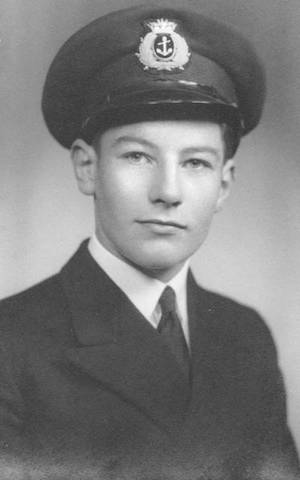 Hopkins, who had come off watch at midnight, was woken by a vivid flash and a simultaneous explosion, followed by alarm bells. His first thought was what to wear – his best uniform, which would get spoilt in the boats, or old clothes and a warm sweater: prudence won over pride.
Hopkins’s lifeboat was secured on chocks on the main deck forward, and as Myrmidon sank there was no difficulty in launching it into the calm sea. Nine other lifeboats were also launched safely with their full complement of 129 passengers, 106 crew and 10 gunners.
Shortly afterwards, in the eerie light of a rising moon, the ship’s bows went under, her stern rose high in the air, and Myrmidon disappeared. As her funnel dipped into the sea there was a long, sad blast from the ship’s siren, a woman passenger in Hopkins’s boat remarking: “That’s poor Captain Caird sounding the whistle as his ship goes down!”
In fact Caird survived after swimming in the oily water for a couple of hours before finding an upturned lifeboat which he helped to right.
As the convoy disappeared into the darkness, the destroyer Brilliant hunted the U-boat. Hopkins was reassured to hear depth charges in the distance, while the smell of fuel oil from the ruptured tanks of Myrmidon filled the warm tropical night.
After some two hours, Brilliant returned: it was strange to hear an English voice booming out over the water “Please hurry along”, but soon the destroyer had 245 extra people to look after, including women and children.
Brilliant’s crew, Hopkins recalled, received their unexpected guests generously and uncomplainingly, landing them at Banana, a small seaport at the mouth of the Congo.
Hopkins eventually reached Britain in the Orient Line’s Orion. Getting off the train at Caterham, he was walking home with his few belongings in a kitbag, when a horse-drawn milk float came trotting down the road. The milkman greeted him, turned his cart round, and Hopkins arrived home from sea on a milk cart.
Hopkins left behind in the lifeboat a leather writing case, the only personal belonging which he had salvaged from Myrmidon.
He never thought of it again until months later, and much to his amazement, it was delivered by the postman to his home in a large OHMS envelope, with his silver pencil, some bank notes, address book, and everything else intact, but no indication of who had found it.
Hopkins treasured these items throughout his life, along with the sweater which he had on that night, wearing it for gardening until his wife eventually threw it out.
In his five years at sea during the war Hopkins served in seven ships – including Glenartney in 1943, when she was one of the first merchant ships to transit the Mediterranean from east to west since 1941. He also served in the Liberty ship Samnesse, in which he made several voyages to the Normandy beaches after D-Day and which was one of the first ships to enter Antwerp after the Battle of the Scheldt in December 1944.
Hopkins “swallowed the anchor” in 1947, but in 2013 he proudly attended a service at St Paul’s commemorating the 70th anniversary of the Battle of the Atlantic.
Anthony George Hopkins was born in London on September 25 1924: his father, George Herbert Hopkins, was a shipbroker had who served on the Western Front with 11th (Pioneer) Battalion of the King’s Liverpool Regiment. He was wounded on December 23 1917 near Ypres and awarded the MC.
The tenor of Hopkins’s career at sea was set on his first voyage, when the Myrmidon was ordered by the convoy’s commodore to take a slower ship in tow. Captain Caird demurred, saying that he had women and children on board who were already concerned by the risks of wartime travel by sea, claiming that the proposal would intensify their anxiety.
Back came the signal: “What is the predominant nationality of your passengers?” To the reply “British”, Caird was told he had misjudged the morale of his passengers, and that he must drop back to assist the other ship.
In March 1947 Hopkins joined Thompson Steam Shipping as a trainee broker, and three years later he moved to his father’s firm, Howe Robinson.
Then in 1951, after Jardine Matheson started a shipbroking business, he was seconded to Hong Kong, beginning Howe Robinson’s links which now embrace offices in Beijing, Shanghai and Singapore.
There were many nations not prepared to trade with communist China, but Hopkins had no misgivings, and his first fixture (the business arranged between the shipowner and the owner of cargo) with the China Chartering Corporation came in 1954.
Hopkins, a colleague remarked, “always had a twinkle in his eye. He was one of those truly nice people who was always interested in others.”
So, back in London, he was assisted by his wife Pauline as Chinese visitors were entertained with Sunday coach outings to Windsor Castle or Karl Marx’s tomb at Highgate.
On reciprocal visits to China, even during the Cultural Revolution, when few foreigners were able to visit the country, Pauline accompanied him. After he had been chairman of Howe Robinson for 10 years, the Chinese invited the Hopkinses on a special three-week tour of their country.
Hopkins enjoyed his 35 years of working with the Chinese, finding them honourable and pleasant people.
As the Greeks had large fleets of tramp ships operating in the seas off China, the Hopkinses also attended numerous Greek weddings, funerals, and ship launches in the 1960s and 1970s. 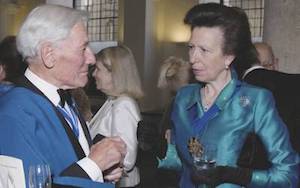 As a liveryman and member of the court of the Worshipful Company of Shipwrights, Hopkins chaired its charities committee, supporting maritime charities such as Sea Cadets and the Sail Training Association. In 1999 he was awarded the Shipwrights’ Medal of Honour, the fourth person to receive the company’s highest award.
Using the diary which he had kept during the war, in 2013 he wrote an unpublished, evocative memoir of his service in the Merchant Navy.
In 1953 he married Pauline Kaye Brown, whom he had met in Hong Kong, later writing: “We have four splendid sons … and I am so fortunate too to have had wonderful support from Pauline for over 60 years.” She survives him, along with their sons.