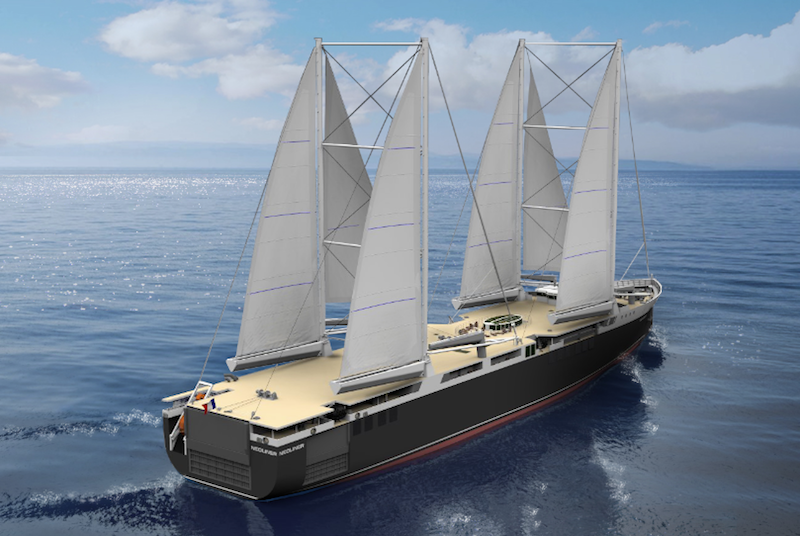 Neoline has selected the Loire-based company Neopolia S.A.S. for the construction of its first two sailing cargo vessels.

The decision follows the international call for tenders launched by Neoline to some fifteen shipyards in 2018.

Neoline has also revealed the signing of a letter of intent with Neopolia for the construction of the newbuild pair.

As informed, the construction of the first 136-meter-long ship is scheduled to start in Saint-Nazaire at the end of 2019 while the launching is planned for the end of 2021.

Neoline is developing a new transport service based on the operation of innovative roll-on/roll-off (RoRo) sailing vessels, saving 80% to 90% of consumption and the associated carbon footprint.

Expected to commence in 2021, the first line will connect Saint-Nazaire to the American east coast and Saint-Pierre & Miquelon.

According to Neoline, the newbuilds will “embody France’s ability to achieve its energy transition in the field of maritime transport.”

“Neopolia has been a strong partner and a support since Neoline was created in 2015, and has accompanied us at every step. However, this decision follows an international call for tenders, at the end of which we objectively considered that the offer brought by Neopolia and its members is the best technically and economically,” Michel Pery, President of Neoline, explained.
“In addition, we are very pleased to have been able to select the construction offer of a local player, because we are convinced that sailing propulsion is a new sector of excellence for French shipbuilding, with strong development potential.”
Pery added that Neoline team will now work on obtaining the necessary financing to proceed with the project.