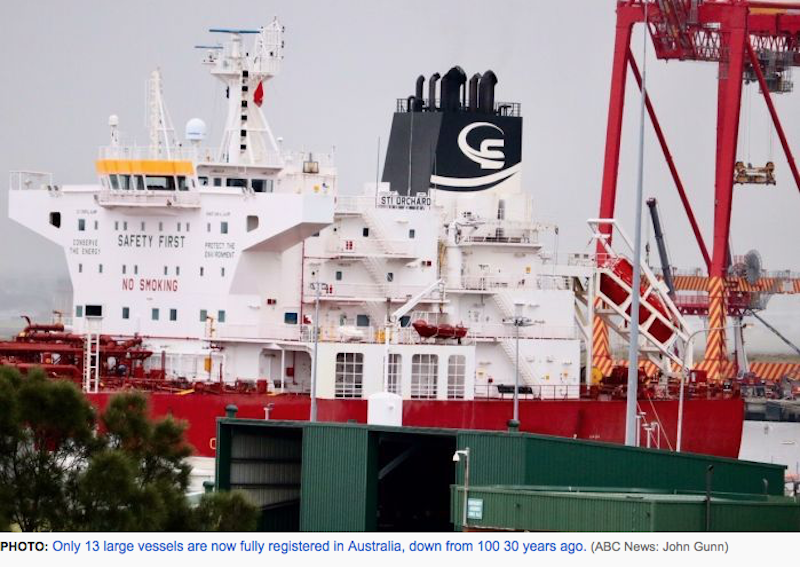 The debate around Australia's need for a larger merchant shipping fleet has been going on since federation.

It is a seemingly constant battle between the case for local jobs versus rising costs.

At the moment, cost-cutting is on top, meaning Australia is now in the unusual position of having a shrinking private merchant fleet.

The ramifications of which are very real for those at the coalface like seafarer Ben Sirasch. "I was out on deck and got called to the captain's cabin and there was just an email saying the contract's terminated," Mr Sirasch said of his abrupt sacking earlier this year. "Then they parked us up in the middle of nowhere, halfway between China and Hong Kong."

In January, he and crewmate Jesse Stevens were on board a cargo ship moving iron ore from the Pilbara, around to New South Wales before heading north to Asia. The route was part of a 17-year-old supply contract between BHP and BlueScope Steel that expires in June.
The men were among 68 workers let go after more than four months at sea when Teekay Shipping Australia was told it was no longer needed to run the route.
"None of us know what we're going to do," Mr Stevens said. "We just need ships on the coast. We need more jobs."

The number of large vessels in Australia has shrunk to about 13, while just 30 years ago there were 100. With little competition in the domestic market, companies can strike a better deal with foreign-flagged ships.

When freight is moved between Australian ports it must be crewed by Australian seafarers. But there is a loophole that allows temporary licences for foreign-flagged ships to operate domestic routes with Australian-level wages kicking in for crews.

"In theory they should. In reality they never do," said Paddy Crumlin, the national secretary of the Maritime Union of Australia and president of the International Transport Workers Federation. He argues foreign-owned ships cook the books. "There's a technical requirement, but they have false books. They've never paid even the international rate," he said.

Shipping lobby group Maritime Industry Australia said companies save millions of dollars by using foreign-flagged ships.
"The cost differential between having a full foreign ship and having a full Australian ship is somewhere in the order of $US5 to $US7 million per annum," Maritime Industry Australia CEO Teresa Lloyd told The Business. She said increasing Australia's shipping capacity back up to 100 vessels would boost the economy. "We could add $4 billion to GDP, we could increase jobs across the Australian economy by about 10,000 and we'd add a billion dollars to direct tax receipts," Ms Lloyd argued.

Securing Australia
Australia's seafaring capabilities also raise national security concerns.
"It gives us no flexibility at all in terms of the types of vessels we could require in strategic circumstances, defensive circumstances," said Professor Sam Bateman, a research fellow at the Australian National Centre for Ocean Resources and Security at the University of Wollongong and a former commodore in the Royal Australian Navy.

Professor Bateman said more privately owned oil tankers and cargo ships would give the Australian Government the option to commandeer those vessels in times of national emergency. Unlike what happened in the late 1990s when Australia was helping East Timor forge its independence. "The Department of Defence had to charter something like 27 cargo vessels to carry Australian stores and troops from Australia across to East Timor," Professor Bateman told The Business. "All those vessels were foreign-flagged vessels."

Election issue
If elected, the ALP has said it wants to create a national strategic fleet with about a dozen vessels, including oil tankers, container ships and gas carriers. It argues that will boost national security, secure access to fuel supplies and add more local jobs. If in government, Labor has said it would introduce a taskforce within its first 100 days in office to assess Australia's shipping capabilities.

The Coalition argues Labor's proposal would likely see costs passed on to the minerals, agriculture and construction sectors.
It currently has a bill amendment stalled in the Senate which it argued would reduce existing regulatory burdens to make shipping a more viable form of transport.
In all the years of debate, previous proposals to subsidise the sector have never come to fruition.

Until election day, at the very least, the fate of the thousands of people dependent on Australia's merchant fleet remains very much at sea.