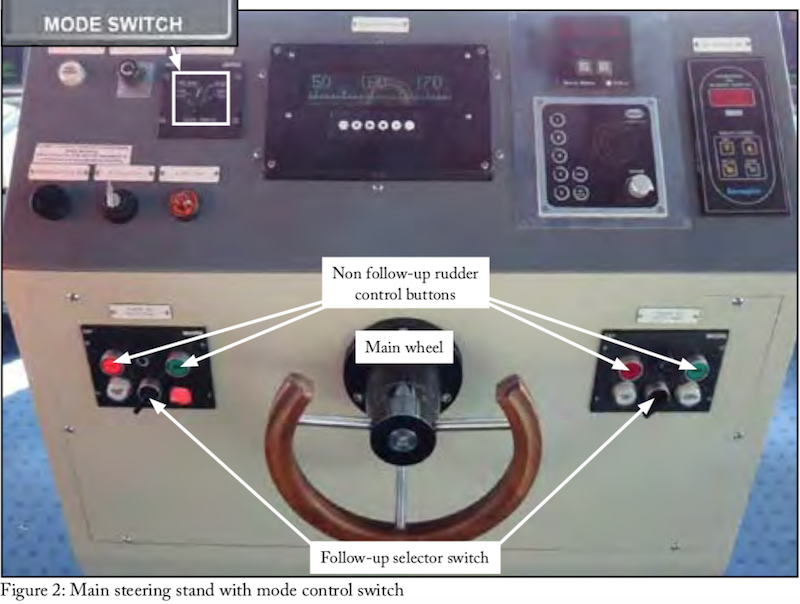 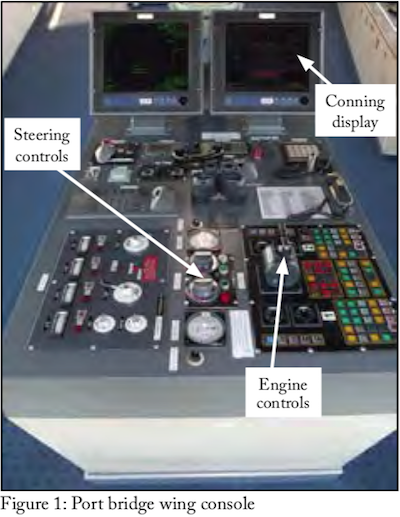 A ro-ro passenger ferry left its berth with 320 passengers, 72 crew and several cars and trucks on board. The planned manoeuvre was to clear the berth, increase speed, and steer a curved track, using port helm, to pass between the two breakwaters at the port’s entrance. The master controlled the engine, thrusters and steering from the console on the port bridge wing (Figure 1).

The ferry cleared the berth on schedule in light winds on a hazy morning. About halfway into its turn towards the breakwater entrance the computerised steering mode changed unexpectedly from the port console to the trackpilot system. Immediately, the trackpilot applied starboard helm to arrest the swing and steer the course it was on when it activated. This was not immediately noticed by the bridge team.

While the rudders moved to starboard, the quartermaster heard a quiet and brief alarm from the centre control console (Figure 2), which alerted him to the steering mode change. He asked the master if the steering was still operating at the port console. In response, the master tried to apply more port helm using his control wheel, but there was no effect. He immediately ordered the quartermaster to change to manual steering, and the quartermaster changed the mode switch (Figure 2 inset) to ‘main wheel’ and applied full port helm. However, the master quickly realised that the vessel would not regain track to pass between the breakwaters and put the engines to full astern.

The ferry was 250 metres from the breakwater at 10kts when the engines went to full astern. The anchors were ordered to be let go and the quartermaster activated the remote releases on the bridge console. The speed reduced as the vessel continued to head for the breakwater, but it was not enough to prevent it hitting the concrete structure head on at about 3.5kts.

No-one else on board was aware of the emergency, and the collision caught everyone by surprise. The passengers and crew were thrown to the deck, loose items were scattered, and a few vehicles moved and were damaged on the vehicle decks. The ship’s crew quickly mobilised to calm passengers and treat any injuries.

The ferry returned to the berth under its own power, where it was met by ambulances as 3 passengers and 10 crew had been injured. The ship was inspected by a classification society surveyor and port state officers, and was allowed to proceed to dry dock. The cause of the fault that changed the steering mode was never found. The vessel re-entered service 12 days after the accident.

The Lessons
1. The steering mode change alarm was relatively quiet, and sounded only on the centre console. Therefore it was not heard by the master, who had control of the helm. When the quartermaster heard the alarm and informed the master, the bridge team’s lack of familiarity with the complex steering system did not allow them to quickly identify the problem and switch to a different steering mode in time to recover the situation.
2. A system to warn crew and passengers of a sudden stop should be available, tested, and used when required, to give  passengers and crew a chance to brace themselves and thereby reduce the likelihood of them sustaining injures. An audible warning will also allow the crew to be better prepared for the aftermath if injuries or damage occurs.
3. Familiarity with critical systems is vital during an emergency, and knowing what the alarms indicate, and the appropriate corrective actions to take, can be the difference between a near miss and an accident.
4. Emergency planning should examine the ‘what ifs’ and encompass all aspects of the ship’s operation. Table-top discussion is useful for this and it should be a forum for ideas. Don’t limit critical systems’ failures to open-water scenarios, but consider their effects when manoeuvring in harbour or in narrow channels.