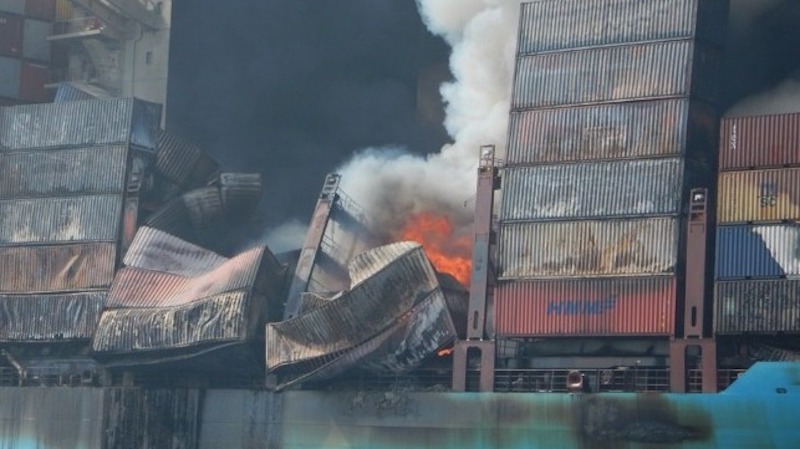 The recent reports of container ship fires has once more focussed those in the container supply chain on safety issues related to the incorrect processing of dangerous goods. The nascent Cargo Integrity campaign initiated by the international transport and logistics insurer, TT Club has as a consequence gained renewed impetus.

The recent fire aboard ‘Yantian Express’, details of the final judgment on the ‘MSC Flaminia’ explosion in July 2012, and the ongoing investigation of the ‘Maersk Honan’ fire are currently making headline news. Then just days ago news has come in of ‘Grande America’ sustaining a container fire in the Bay of Biscay and subsequently sinking. These perilous incidents not only frequently cost lives, millions of dollars in cargo losses and ship damage, but also significant delays in cargo supply chains amounting to major disruption across numerous industries in these ‘just-in-time’ days.

Yet these incidents are merely the tip of a failing safety iceberg. Taking the maritime segment of global supply chain, it is estimated that a major container ship fire at sea occurs on average every 60 days, albeit that there have already been four major cargo-related fire incidents in 2019. Furthermore TT Club’s records indicate that across the intermodal spectrum as a whole, 66% of incidents related to cargo damage can be attributed to poor practice in the overall packing process; that is not just in securing but also in cargo identification, declaration, documentation and effective data transfer. The calculated cost of these claims in the Marine Aviation & Transport (MAT) insurance sector is in excess of USD 500 million a year.

Peregrine Storrs-Fox, TT Club’s Risk Management Director, is leading the Cargo Integrity charge, “We are endeavouring to focus all direct and indirect stakeholders on recognising and doing the right thing,” he states. “One particularly critical aspect of this is the correct declaration and handling of dangerous goods (DG).”

All types of cargo can be mishandled, however wrongly classified, labelled, packed or simply inaccurately identified dangerous commodities bring the greatest potential risk of disaster. Estimating the degree of failure to comply with best practices in this regard is not straightforward. ICHCA International, the cargo handling operatives association has calculated that of the 60 million packed containers moved each year, 10% or six million are declared as DG. Information from published government inspections (which are invariably biased towards declared DG loads) suggests that 20% of these are poorly packed or incorrectly identified. This translates into 1.3 million potentially unstable DG containers traveling around the world each year.

Storrs-Fox emphasises that this scale of risk is elevated when undeclared or misdeclared DG consignments are considered. “In these cases an estimate of volumes is more obscure. An indication has been given through the work of one container carrier, Hapag-Lloyd, developing a profiling algorithm to search its booking system for potential misdeclaration of commodities. Results from Cargo Patrol, when extrapolated to the carryings of all the lines, concludes a reasonable estimate in excess of 150,000 volatile containers in the supply chain each year.”

Container lines in particular are making efforts to mitigate the problem. The Cargo Incident Notification System (CINS), in which many of the top lines participate, has been active for a number of years and has successfully identified a number of commodities that commonly cause problems during transport – not always limited to those formally identified as dangerous. TT Club has additionally promoted, together with UK P&I Club and Exis Technologies, the Hazcheck Restrictions Portal, which is designed to identify and streamline the complexity of regulations and protocols imposed by carriers and ports around the world in relation to transporting declared dangerous goods.

However, as Storrs-Fox concludes, “There is very much still to be done in achieving true Cargo Integrity. Our diverse campaign is seeking significant cultural and behavioural change to say the least. Certain elements may require legislative action, enforcement and inspection and there are great challenges in the field of technological development. Above all there is a need for all involved in the supply chain to have a realistic perception of risk and a responsible attitude towards liability.”