Scots ship owner who steered his firm through choppy waters

SIR IAN DENHOLM, who has died aged 91, was the scion of a famous British shipping family and a world leader in good ship management.

John Ferguson Denholm, always called Ian, was born on May 8 1927 at Kilmacolm, Renfrewshire, the eldest of three children of Sir William Denholm, and educated at Loretto School. His father insisted that he should go to sea and at 17 he became a deck apprentice under the legendary Denholm skipper Captain James Henderson in the cargo ship Ocean Strength, undertaking one Arctic and one Atlantic convoy in wartime. Before coming ashore in 1948 he qualified as a second mate.

The 1950s were a critical time for J & J Denholm, which had been founded a hundred years before. After losses incurred during the war, the Denholms took the decision, unlike many British shipowners, to rebuild their fleet of tramp ships, a far-sighted move which brought about rapid growth.

Young Denholm, sent to work in London for a year to learn the brokering side of shipping, was warned: “Dinna acquire a broker’s mentality: they are always seeking compromise!”

Aged 24 he returned to Glasgow to join the main board. While others were preoccupied with chartering, buying and selling ships, Ian and his younger brother Bob set up Denholm Ship Management, which raised professional standards with innovations in training, crew facilities and communications. They created a world-class organisation and soon were asked to manage other owners’ ships; by 1977 Denholm Ship Management ran 1 per cent of the free world’s fleet.

Meanwhile, in 1972, he succeeded his father as fourth chairman of J & J Denholm. His leadership style was shrewd but conservative, and, though not averse to taking risks, he felt “over-borrowed if there was not at least £1 million in the bank”. This philosophy steered Denholms through the choppy waters of the 1980s, when many British shipping firms went under. After-work drinks with “Uncle Ian” were always an entertaining experience, either a very instructive lesson in company history, or a cross-examination on its latest activities or board papers.

In 1983 he was due to become chairman of P & O but the illness of his brother and daughter caused him to step back to spend more time with his family. As he approached his own retirement in 1998, Denholm remembered “charmingly disruptive” visits to headquarters by his father and uncle when in their 80s and established the rule that Denholm directors should retire after turning 70. Succeeded by his oldest son, he became life president and continued to read board papers. 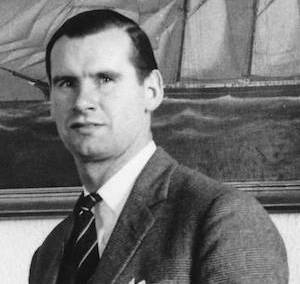 Denholm was president of the UK Chamber of Shipping in 1972-73 and, unusually, served a second term in 1988-89. He was appointed CBE in 1974 and in 1989, like his father and uncle before him, he was knighted for services to shipping. He followed in his grandfather’s footsteps as president of the Baltic and International Maritime Council (1991-94).

Denholm was also a governor of Loretto School and a director of the Bank of Scotland. He was a justice of the peace and a deputy lieutenant of Renfrewshire, as well as honorary Norwegian consul in Glasgow, deacon (master) of the Hammermen of Glasgow and president of the Royal Alfred Seafarers’ Society.

In the 1950s Denholm survived tuberculosis, and after giving up shooting, sailing (at one time he was co-owner with Adam Bergius of the 1911-built Bristol pilot cutter Hirta), and skiing in his 70s after a hereditary condition restricted his mobility, he took up fishing, taught himself differential calculus and played as many as four games of chess simultaneously on the internet.

In 1952 Denholm married Elizabeth Murray Stephen, from a Scottish shipbuilding family; she and one of their daughters predeceased him, and he is survived by a daughter and two sons.