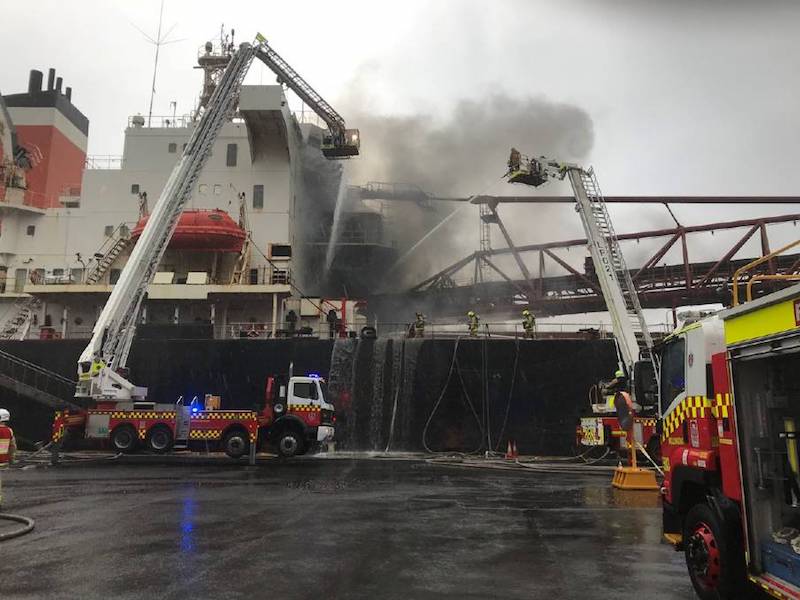 A dramatic fire aboard a bulk carrier at Port Kembla most likely began on the ship’s conveyor belt before taking hold in a 12,000 cubic metre pile of gravel-like material far below deck, firefighters say.

The fire was detected about 3.30am Monday, as a load of dolomite was being offloaded from the CSL-owned Iron Chieftain at Bluescope-owned berth 113.
Twenty-two crew evacuated without injury

The Australia flag ship, a self-discharging bulk carrier, relies on its extensive conveyor system to offload up to 34,000 tonnes of steel-making ingredients.

Naked flame was at times visible from the conveyor belt. Down below, the blaze smouldered, difficult to access.

The ship created a unique set of challenges for firefighters, who used ladder platforms to flood the hold with foam in a bid to suffocate the fire, said Fire and Rescue NSW Assistant Commissioner Paul McGuiggan. “It looks like the fire actually started on the conveyor belt itself – you can imagine the bearings and things around there - and that has actually transfered into the product,” he said.  “It’s going to take some while for the [foam] to actually seep down through and get into the lower parts the bilge parts of the ship.

“It’s extremely hazardous conditions. For the fire to actually get involved in that particular product [dolomite] it would have taken a fair amount of burning.  “What crews have been able to do is actually get onto the deck part of the ship and at various times were able to get into ... parts of the hold. That has proven a challenge because in the lower part of the ship … is enough space for about one person, and the water level sits up around your knees, so it’s not a very safe environment to put anyone.”

Up to 80 firefighters tackled the blaze at its peak. Tug boats were used to shoot water on the ship’s side for several hours Monday morning, as part of efforts – successful so far - to reduce the temperature of the smouldering mass inside.

Fire authorities have been using thermal imaging cameras to monitor the temperature of the ship and its fuel tanks.

Firefighters will spend the remainder of Monday spraying more foam into the hold and monitoring temperatures. “From there it might be just a matter of bottling it up, letting the temperature come down to a manageable level.”

Fire crews are expected to spend 3-4 days snuffing out the fire and ensuring it doesn’t re-ignite.

Comm McGuiggan said the emergency was not affecting other port operations and firefighters were working with port authorities to arrange ship movements in and out.

Comm McGuiggan said the firefighting foam was contained within the ship’s bilges, with no overflow.

Firefighters say the blaze is contained to a small part of the hold and it is likely the ship will be salvaged.