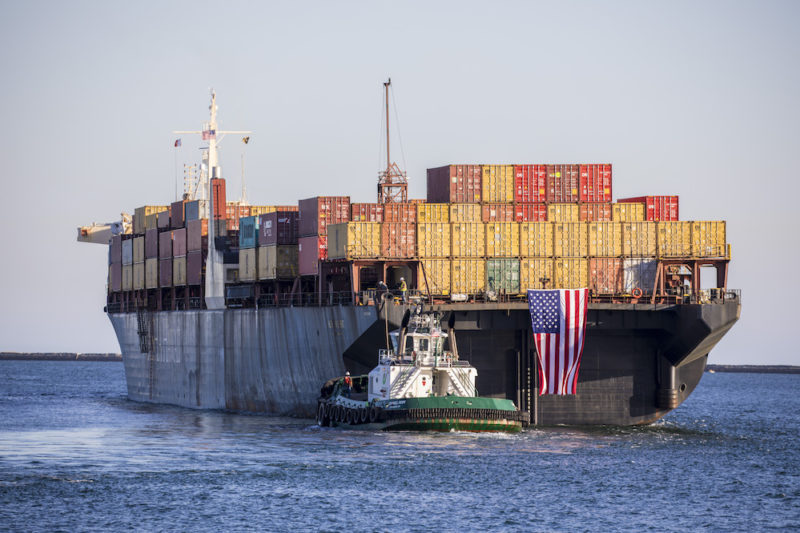 Today 22 May is National Maritime Day ­– a day that has been celebrated for the past 85-years. The United States is, and always has been, a maritime nation. From the very founding of our country, the American maritime industry has served a critical role in maintaining our national, homeland and economic security. And today, its importance to our nation remains great.

Each year on National Maritime Day, we recognize our nation’s mariners and the importance of the industry they support. The U.S. domestic maritime industry, the American built, owned, crewed and flagged vessels that move cargo between U.S. ports, is significantly important for our nation.

In times of peace, American mariners crew commercial vessels that move almost one billion tons of cargo per year between American ports. The industry that these mariners support sustains nearly 500,000 American jobs, $28.95 billion in labor compensation, and more than $92.5 billion in annual economic output.

Critical U.S. industries depend on the efficiencies and economies of domestic maritime transportation. Our vessels are designed and built to meet the unique transportation needs of domestic customers in a variety of industries and in all manner of geographic areas, from grain moving by barge on the Mississippi River, to crude oil coming from Alaska, to iron ore on the Great Lakes, to consumer goods being shipped to Alaska, Hawaii and Puerto Rico. Over 40,000 vessels of all descriptions comprise the domestic fleet. American mariners and vessels not only move our cargoes around the country, they are essential to our ability to dredge our own channels and deliver supplies to American offshore oil exploration and production facilities.

The work that merchant mariners do every day in the commercial industry also prepares them for times of war. Most people don’t realize that more than 90% of our military goods that move to a war zone travel on ships, and the majority of those ships are crewed by U.S. civilian mariners.

For example, during World War II, more than 243,000 members of the American Merchant Marine served, with more than 8,000 giving their lives. One in twenty six mariners serving gave their life, which is the highest rate of casualties of any service. During Operations Enduring Freedom and Iraqi Freedom (2002 – 2010), the American domestic fleet provided fully half of the mariners used to crew U.S. government owned sealift vessels activated from reserve status.

Yet today, reductions in the U.S. flag international fleet and retirements in the workforce have led to a shortage of mariners in this country, making our strong domestic fleet all the more important. Rear Admiral Mark Buzby, Administrator of the Maritime Administration, recently warned that the country is short the number of mariners that would be necessary in the case of any conflict. Without our strong domestic merchant marine, we simply will not have American mariners available when we need them to man our reserve fleet.

Merchant mariners are not just important for protecting our security beyond America’s shores – they also protect our homeland security. Because of the Jones Act – a law that requires goods that move between two domestic points be moved on American vessels – foreign mariners are only permitted to operate in international trades; they are not serving on the vessels that serve America’s coastwise trades. The mariners who operate every day in our inland waterways are Americans, who are committed to being the eyes and ears of homeland security.

Therefore, on this National Maritime Day, we have a multitude of reasons to be thankful and recognize we are a great maritime nation. As our nation considers both threats overseas and growing commerce demands under deteriorating infrastructure systems, American merchant mariners – and the domestic industry they support – will proudly continue to answer the call of duty and deliver for our nation.

Administrators Note: - perhaps Australia could learn from the U.S. situation and the Jones Act