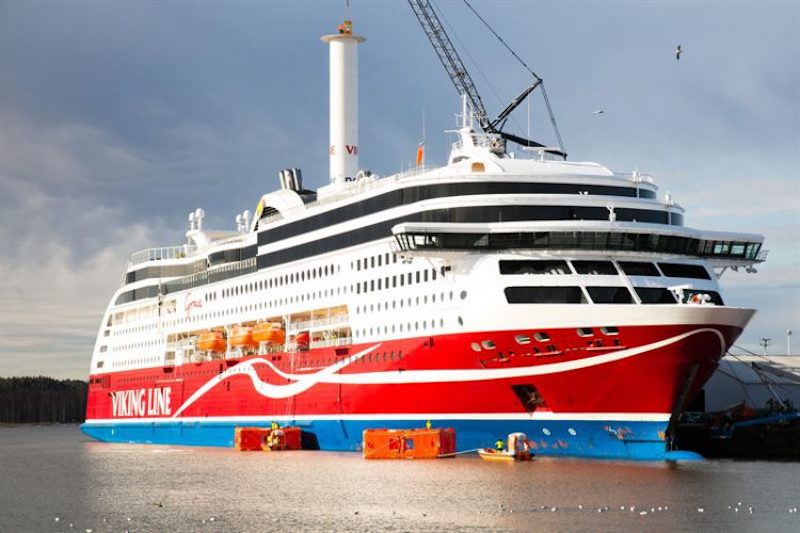 Viking Line’s passenger ship M/S Viking Grace has been fitted with a rotor sail for the utilization of wind power, becoming the world’s first passenger ship to feature the technology.

The Rotor Sail Solution, developed by the Finnish company Norsepower Oy, will cut fuel consumption and reduce emissions by up to 900 tonnes annually, Viking Line said.

The LNG-fueled Viking Grace will be deployed on wind-assisted voyages between Turku, Finland and Stockholm, Sweden from April 12, 2018.

“As the rotor is spinning, the passing air will flow with a lower pressure on one side then the opposite side. The propulsion force created by this pressure difference will drive the vessel forward. The rotor sail operation is automated and the system will shut down in response to any disadvantageous changes in the direction or force of the wind,” the company explained.

The cylindrical rotor sail installed on M/S Viking Grace is 24 m in height and 4 m in diameter and it uses the Magnus effect for propulsion.

“We want to pioneer the use of solutions that reduce the environmental load. Based in Finland, Norsepower has developed a world-class mechanical rotor sail solution that will reduce fuel consumption. We are proud of the fact that our Viking Grace will be the first passenger ship in the world to benefit from this innovative solution,” Jan Hanses, CEO of Viking Line, said.

“The last traditional windjammers in the world were owned and operated by shipping companies based in Åland, so it’s fitting that Åland-based Viking Line should be a forerunner in launching modern auxiliary sail technology,” Tuomas Riski, CEO of Norsepower, said.

In addition, Viking Line plans to utilize wind propulsion on the company’s new vessel, which is due to be operational in 2020. Built in China, the passenger ship will be equipped with two mechanical rotor sails supplied by Norsepower, thus doubling the wind power potential.