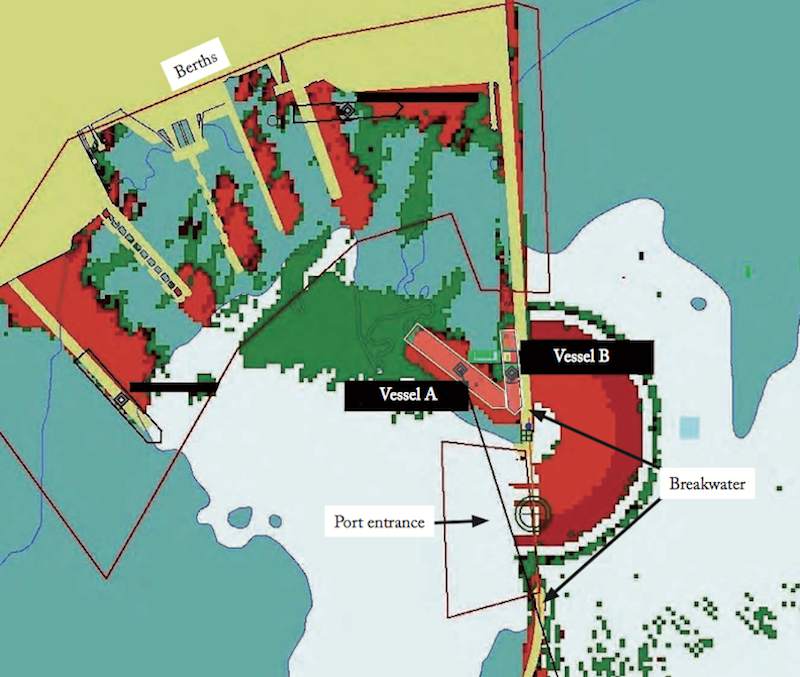 A 187m long passenger/ro-ro cargo ferry carrying in excess of 400 passengers and crew was approaching a regular port in daylight. The bridge team were preparing to commence their arrival manoeuvre, which, once inside the breakwaters, involved turning the ship to starboard and then reversing and manoeuvring it port side alongside a berth located on one of a number of piers. It was a manoeuvre that the bridge team had carried out several times each day.

On this occasion, there was thick fog in the port with 200m visibility, and bright sunshine above the fog, resulting in significant glare.
The ship passed between the breakwaters and entered the port. e master had the conn and he was assisted by the chief officer on the bridge. A helmsman was steering the ship to the master’s orders.

The master took control of the engines, thrusters and helm on the port bridge wing, and then commenced swinging the ship to starboard.  The officer on the aft mooring deck reported clearing distances from the piers astern and the chief officer apprised the master of the ship’s speed.

The officer on the aft mooring deck reported to the bridge team that he could see the intended berth and that the ship was swinging 60m clear of the pier astern. At this point, with the ship moving at 2kts ahead, the master set both combinator levers to ‘stop’. He then temporarily repositioned himself on the bridge wing in an unsuccessful attempt to sight the intended berth astern.

Port control called the ship (see figure -Vessel A) on VHF radio advising of its close proximity to the ship berthed (see figure - Vessel B) on the breakwater ahead. The master activated a pre-recorded message on the public address system instructing passengers and crew to brace for an impending collision. However, the combined effect the astern propulsion and deployed anchor prevented contact with the ship ahead, but only by 3m.

The Lessons
1. While manoeuvring in restricted visibility with no visual shore references, it can be very easy to lose situational awareness in the confines of a regular port when manoeuvring is normally achieved by sight.

Blind pilotage means the navigation of the ship through restricted waters in low visibility with little or no recourse to the visual observation of objects outside the ship.

To navigate safely in restricted visibility, blind pilotage is knowing your ship’s position, course and speed made good, as well as its handling characteristics, such that the ship is guided on its intended track in a precise fashion using all appropriate instruments and electronic displays to hand.

Blind pilotage is a worthwhile skill that can be practised regularly in clear visibility. Mariners must be able to trust their electronic equipment and instruments, know which settings and scales work most appropriately for the intended manoeuvre, and proactively apply their skills and knowledge when conditions demand.

In this case, the master was ill-prepared to conduct the astern manoeuvre without sight of the ship’s intended berth. Instead of monitoring the electronic navigation aids available and noting the reported  increasing clearing distance astern, he lost focus and mistakenly applied ahead propulsion in an attempt to gain his normal visual reference astern.

2. Manoeuvring a ship in close proximity to a berth is a dynamic process, and one which requires teamwork as well as skill to achieve safely, particularly in restricted visibility.

Effective bridge resource requires a continual flow of information between  members of the bridge. A good practice is for the master, or whoever is manoeuvring the ship, to state aloud what he intends to do and when he is actually doing it. This allows the team to work together, from the same shared plan, enabling the team to monitor and immediately challenge any deviations from the plan.

In this case, 56 seconds passed from the master’s application of ahead propulsion to his mistake being recognised. However, the helmsman’s focus, and shouted warnings concerning the ship ahead and the ferry’s speed, were commendable. Furthermore, the subsequent actions of the bridge team to recover the situation - letting go the anchor, applying astern propulsion and instructing passengers and crew to brace, were effective and ultimately prevented far more serious consequences.