A Flettner Freighter in the Making 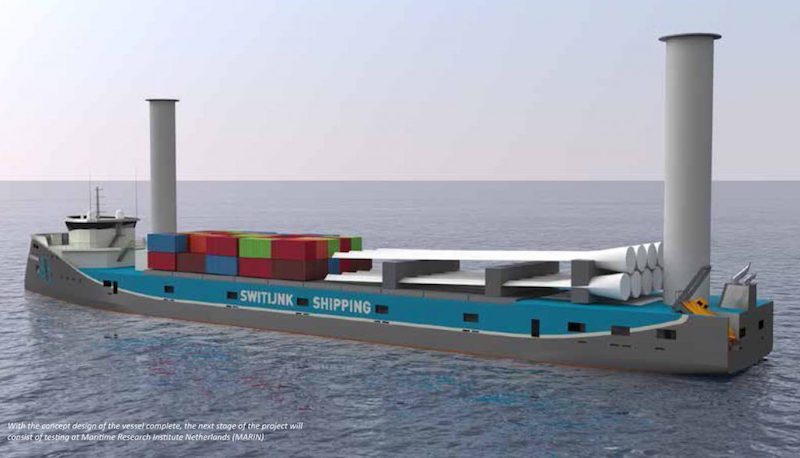 For centuries shipping depended on wind, but the industrial revolution changed that. Vessels were no longer stuck in the doldrums. However, with the Paris Climate Agreement in mind, shipping companies are looking at wind again for efficiency reasons.

Recently C-Job Naval Architects delivered the design for a wind-assisted general cargo vessel to Dutch shipping company Switijnk Shipping. The 8,500 dwt vessel will be equipped with two Norsepower Rotor Sails that will supplement the main engines and is expected to achieve fuel savings of approximately 14 per cent.

Magnus effect
This vessel, called the FF8500, is a Flettner ship. They are a type of ship that uses the Magnus effect. In the design Rotor Sails are deck-mounted rotating cylinders that utilise the Magnus effect to create a propulsive thrust. The Magnus effect is a force that acts upon a spinning ball or cylinder in a moving airstream. Although the phenomenon is named after the German physicist, Heinrich Gustav Magnus, who described it in 1852, it was originally observed by Isaac Newton almost two hundred years earlier.

The name Flettner ship comes from Anton Flettner, a German engineer, who built the first vessel, the Buckau, using this effect in 1924. This vessel successfully crossed the Atlantic in 1926.

Comparable
“Our experience from the Project [email protected] study showed that Rotor Sails were the most viable choice compared to other wind assisted propulsion systems,” explains C-Job Business Manager Jelle Grijpstra.“And then, together with Finnish Rotor Sail supplier Norsepower, we concluded that two larger Rotor Sails were most effective for this project. This was because these would yield a comparable propulsive force to four smaller units. Also, with two Rotor Sails, one on the bow and one on the stern, there would be no chance of wind shadows affecting performance.”

The Rotor Sails were chosen for this project because they are easy to use, safe, reasonably quiet, with no need for extra crew, and cheaper in investment compared to other systems. In addition, the effectiveness of Rotor Sails has been successfully proven.

Testing
The subject of the main engines of the FF8500 has yet to be decided upon.

“Switijnk has a well-defined vision of sustainable shipping and we are glad to sit down and share our knowledge with them. We have an extensive track record of integrating mission equipment, and we have looked at all the options available to help them achieve their ambitions. We have reserved space for LNG engines; although this will be dependent on LNG bunkering infrastructure along their sailing routes.”

Due to the dependence on trade winds, a 100 per cent sailing vessel without an engine is not economically feasible within the commercial cargo transport sector. With the concept design of the vessel complete, the next stage of the project will consist of testing at Maritime Research Institute Netherlands (MARIN).

The intention of this velocity prediction research is to validate the design and to quantify the fuel savings to be gained.

“Once investors are convinced and the financing is arranged, then Switijnk can continue with the process of selecting a shipyard to build the vessel,” Grijpstra adds.