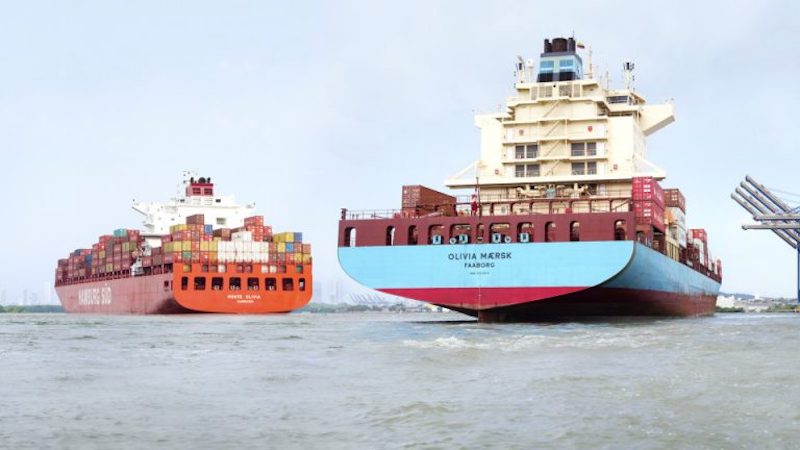 Danish container shipping giant Maersk Line has cemented its spot as the global leader in the sector with the latest acquisition of German carrier Hamburg Süd.

The acquisition, Maersk Line’s largest so far, was closed on November 30, following approvals from 23 regulators, obtained by the company in less than a year since its acquisition plans were announced in December 2016.

The move has paved the way for the creation of the world’s largest containership fleet of 773 vessels, including owned and chartered ships.

Namely, Maersk Line’s fleet of 668 vessels, with an average age of 9 years, will be enlarged by 105 ships from Hamburg Süd. The average age of the German carrier’s fleet is 6 years.

The combined fleet will have a capacity of 4,156,500 TEU, according to Alphaliner’s figures.

What is more, the German shipping firm has five 19,150 TEU ships on order that will join Maersk Line’s orderbook.

On the other hand, Maersk Line said in its report for the third quarter of this year that it had 20 vessels in the orderbook, corresponding to 261k TEU, slated for delivery in 2017 and 2018.

These included seven 20.6k TEU second generation Triple-E’s, six 15.2k TEU vessels and seven 3.6k TEU ice-class vessels. However, based on Alphaliner’s data, two ships from the batch have been delivered since.

The joint fleet, once integrated, will be carrying 19.4 percent of the global trade, according to Maersk Line.

Combined, the two companies, which share over 100 years in the business, target to obtain operational synergies in the region of USD 350-400 million annually as from 2019.

Nevertheless, the focus at the moment is on the integration of the two companies, which“ is fundamental for the viability of the deal,” as stressed by Chief Commercial Officer (CCO) at Maersk Line, Vincent Clerc.

“Integrating two companies is always a challenge. My wish and hope are that we learn from each other and become stronger together,” Ane Mærsk Mc-Kinney Uggla said commenting on the process.

Maersk Line acquired Hamburg Süd for USD 4.4 bn on a cash and debt-free basis through a syndicated loan facility.