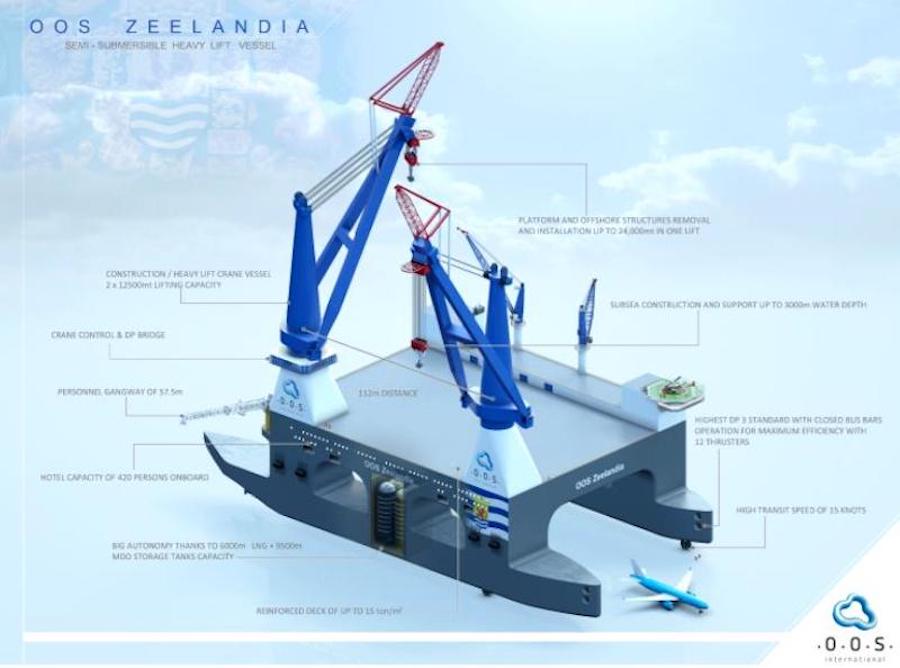 China Merchants Industry Holdings has won a contract for the construction of a ‘revolutionary’ LNG-powered semi-submersible crane vessel, the OOS Zeelandia.

Namely, the shipyard has inked a Memorandum of Understanding with the Dutch Holding OOS International Group B.V.  for the basic design and construction of what promises to be the largest SSCV in the world, as confirmed by the company’s CEO Léon Overdulve.

According to Overdulve, it will also be the most powerful LNG SSCV ever constructed.

OOS has revealed the OOS Zeelandia during the EU-China Blue Industry Cooperation Forum on December 8 in Shenzhen, but said it has already signed the MOU with CMIH back in July this year.

The basic design is said to be already in progress.

As disclosed, the platform will be equipped with two cranes with a lifting capacity of 12,000 tonns per crane. The aft crane will be fitted with a 360-degree rotating DP work bridge where DPO’s and crane drivers are located next to each other.

There will be an open deck space for positioning and transport of heavy modules, 112 meters between the cranes and a large hotel capacity integrated in the deck box, OOS International said.

Furthermore, the ICE Class 1B LNG vessel is designed to reach a high transit speed up to 15.4 knots and will have a low fuel consumption due to its ship shaped asymmetric design.

“These immense volumes that go beyond the capacity of our current fleet will be of great value to the decommissioning and subsea installation market based on client demands concerning the removal and installation of a high number of platforms,” Overdulve said.

Two of the current SSCVs of OOS International are in operation and two new vessels were ordered from China Merchants Industry in 2016. The OOS Serooskerke and OOS Walcheren, once delivered in 2019, can be utilized for dismantling, lifting and removal of platforms.

Both vessels will be equipped with two heavy lift Huisman cranes with a total crane capacity of 4,400 tons and a sizeable hotel capacity of 750 persons on board of each.