Downes was already at sea in the Merchant Navy when the Second World War broke out and he was called up as a midshipman in the Royal Naval Reserve. Asked if he would volunteer for dangerous service, the 18-year-old immediately said “Yes”. The service was in what the Admiralty called “special service ships” and others called mystery ships or Q-ships, after their forerunners from the First World War.

Downes joined one of nine such vessels, a slow, elderly steamer known to the Admiralty as HMS Botlea, but to the world as the SS Lambridge. She was armed with 4 in guns hidden behind drop-down steel doors and underwater torpedoes, the idea being that she should trail her coat in likely U-boat areas. 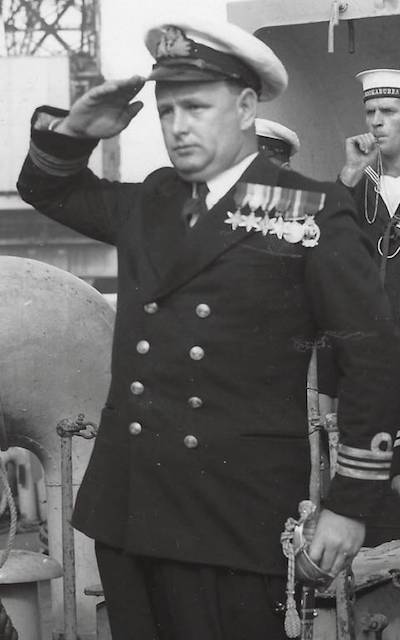 It was hoped that an enemy submarine would surface to use her gun instead of wasting a torpedo, a pretend “panic party” from the Q-ship would take to the boats, but as the U-boat approached to interrogate or to pick up the ship’s papers, Lambridge’s guns would be unmasked and open fire. Such a tactic had worked in the Great War, but by 1940 German U-boats were alerted. Instead, two Q-ships were torpedoed without warning while pretending to be stragglers from convoys, no other Q-ships achieved anything, and the scheme was abruptly ended after Downes in Lambridge met the British light cruiser Neptune. Lambridge failed to send the correct response to challenge and was boarded. Most of the crew were hiding by their guns and Downes was lounging on the upper deck dressed in scruffy clothes, but he was startled to realise that he knew one of the boarding officers and might be recognised, so he too quickly hid himself.

Meanwhile, the boarding party examined Lambridge’s false papers and wrongly concluded that she was an innocent merchant ship. All the while Neptune lay stopped, beam on, a quarter of a mile away, with her main armament fore-and-aft, the crew enjoying the sunshine. Downes recalled: “We could have sunk her with no trouble at all.”

When the incident was reported to the Admiralty, the captain of Neptune got “a hell of a blast”, but the whole scheme had been so secretive that no “lessons learned” were passed on. Subsequently, it was thought that had a warning been passed on, it might have helped to save the cruiser HMAS Sydney when she met and was sunk by a German Q-ship in November 1941.

Arthur Michael Downes was born at Burgh Heath, Surrey, on July 23 1921 and trained to the sea at the Thames Nautical Training College, HMS Worcester.

As a cadet he manned the Cutty Sark on her last voyage from Falmouth to Greenhithe on the Thames in 1938, and is the last survivor of that voyage.

From 1942 to 1945 he served as navigator and ship’s anti-submarine officer in the River-class frigate Tay, part of Commander (later Vice-Admiral Sir) Peter Gretton’s Escort Group B7, when he participated in some of the bitterest convoy battles of the Second World War.

Having in March 1943 successfully escorted Convoy ON173 with no losses, Tay was part of the escort for the return convoy, Convoy HX231 from Halifax, consisting of 61 ships, which was attacked on April 4 in mid-Atlantic by a wolf pack of 15 U-boats: two U-boats were sunk for the loss of six merchant ships and the wolf pack was driven off.

Commencing on April 28, a third convoy, Convoy ONS5 of 43 ships, was attacked over seven days by three wolf packs, with only a short break when the U-boats and the convoy were dispersed by appalling weather. Thirteen merchant ships were lost but five U-boats were sunk.

Next, in mid-May, Downes in Tay was part of the escort of Convoy SC130 of 39 ships, which was attacked over four days by two wolf packs. No merchant ships were lost but four U-boats were sunk including U-954 in which Peter Dönitz, youngest son of Admiral Karl Dönitz, the German U-boat commander-in-chief, perished with the rest of the crew. May 1943 became known as Black May by the Germans, and further U-boat operations in the Atlantic were suspended.

Subsequently Downes served in the escort carrier Patroller which was employed as a troopship in the Far East, until he was discharged in March 1946. He had continued to study for his mate’s and master’s certificates and postwar he joined Shaw Savill’s ships, sailing mainly on the UK to Australia run, and then the Adelaide Steamship Company ships on the Melbourne to Cairns run.

In 1951 he returned to Britain for naval training before joining the Royal Australian Navy, where as a lieutenant-commander he was Master Attendant of the Garden Island naval base, deputy Captain of the Port and Senior Pilot, Sydney, and he commanded the Australian boom defence vessel Kookaburra, the tugs Sprightly and Emu, and the motor vessel Woomera.

In 1960 he retired to set up as a marine surveyor and compass adjuster, a business he ran for the next four decades.

He was a keen swimmer and long-standing member of the North Sydney Anzac Club swimming section, Balmoral Beach Swimming Club, and until recently still won handicap races. He was also a keen sailor and a life member of the Royal Australian Navy Sailing Association.

Mike Downes married Joan Gaffney in 1953 in St Patrick’s Cathedral, Melbourne; she predeceased him and he is survived by their four sons and a daughter.