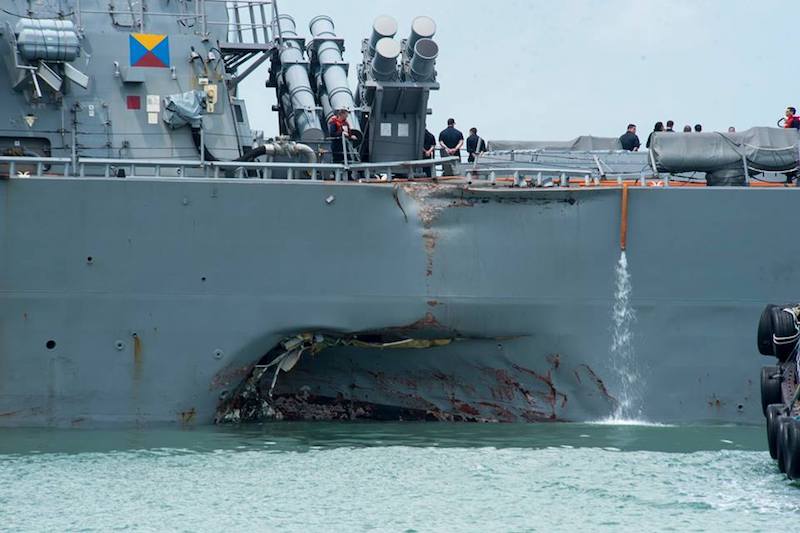 Following the fatal collisions between US Navy ships and merchant vessels and the loss of 17 sailors since the beginning of this year, the Navy’s ships will become more visible in high traffic areas so as to avoid such incidents occurring in the future.

Chief of Naval Operations Adm. John Richardson said in a hearing on Tuesday, September 19 that in the aftermath of the recent incidents navy ships are now turning on their automatic identification systems (AIS) while in heavily trafficked areas.

The hearing was held within a comprehensive review of surface fleet operations and investigation into the causes that led to the incidents involving three navy ships homeported in Japan.

In response to these incidents, the Chief of Naval Operations ordered an operational pause for all fleets worldwide.

“How in the world does a billion dollar destroyer not know that a freighter is closing in on it, and how this could possibly happen,” asked Senator Angus King during the hearing. “I’ve talked to Maine lobstermen and they’re scratching their heads. They can tell when there’s a flock of seagulls of their bow.”

As explained by Richardson, US warships have primary and backup radars onboard, along with systems intended to alert the crew that a vessel is closing in. Warships also have officers on board with binoculars that are on the lookouts.

Nevertheless, the navy ships are designed in such a way that they have a lower radar cross-section.

But this stealth also imposes a burden on Navy crews to understand non-threatening marine traffic will have difficulty recognizing the size, location, and speed of Navy ships, Richardson added.

According to initial investigation findings, actions are needed to address persistent maintenance, training, and other challenges affecting the navy’s fleet.

To remind, in August US missile destroyer USS John S. McCain was involved in a collision with an oil/chemical tanker Alnic MC while underway east of the Straits of Malacca and Singapore. Ten sailors died due to the collision.

The latest incident is the fourth one this year involving a US Navy vessel, and just two months apart from the USS Fitzgerald collision with a merchant vessel that killed seven sailors.