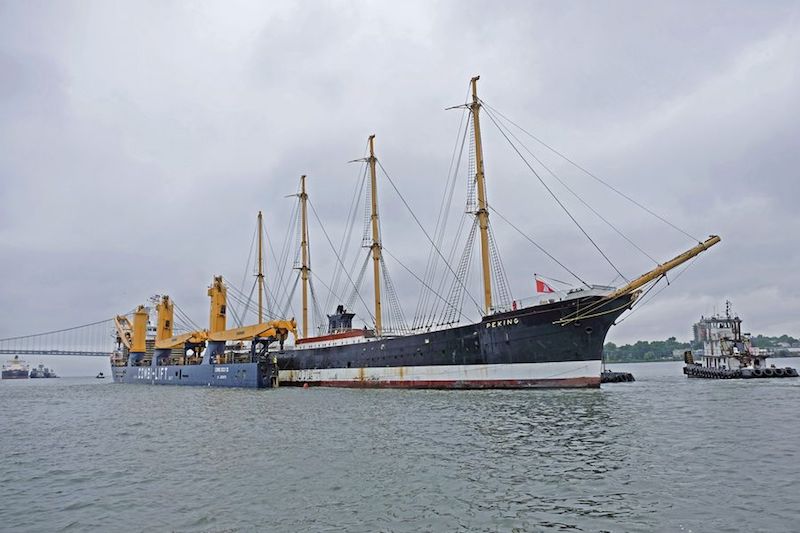 On an overcast Friday in New York’s inner harbor, the windjammer Peking, was gently slipped into the flooded well deck of the heavy-lift ship Combi Dock III.  Once in position, the heavy-lift’s ballast tanks were pumped out, lifting the historic steel-hulled four-masted barque. In the next few days, the Combi Dock III will carry the Peking across the Atlantic for a complete restoration in a shipyard near Hamburg, where the ship was built in 1911. Once restored, the beautiful old ship will be the centerpiece of Hamburg’s new maritime museum.

Peking was built in 1911 at the Blohm & Voss shipyard in Hamburg for the German ship owner, F. Laeisz, one of the famous Flying P Liners, which were among the last of the great sailing ships to round Cape Horn carrying cargo. Peking made voyages from Europe to the west coast of South America with general cargo and returned filled with nitrates for use in the making of fertilizer and explosives. The windjammer was made famous by the Irving Johnson film Around Cape Horn which documented her 1929 passage around the southern tip of South America in hurricane conditions. After 1933, the Peking served as the school ship, Arethusa II, mooring on the River Medway in Great Britain.  She was purchased as museum ship by the South Street Seaport Museum in 1975.

Remarkably,Peking is one of four of the original Flying-P Liners to survive. The Pommern is a museum ship in Mariehamn, Finland. The Passat is a museum ship in Lübeck’s sea resort Travemünde, Germany and the Padua, renamed Kruzenshtern, is still sailing as a school ship under the Russian flag.